A Trip to See the New Loch-Eel Monster in Lochiel, South Australia | Review 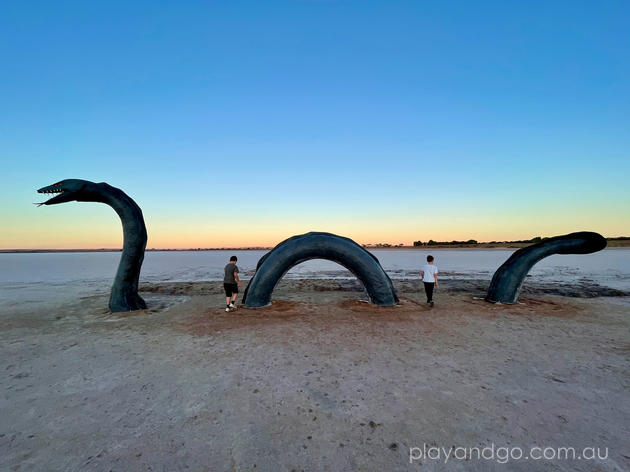 The tiny town of Lochiel – 125km north of Adelaide – has a new Loch Ness monster, dubbed “Lochie”. And it lives on our state’s most popular pink lake, Lake Bumbunga.

The sculpture is a new addition for South Australia’s most popular pink lake. Installed in March 2021, it’s part of a $450,000 Lake Bumbunga tourism project by Wakefield Regional Council. It’s supported by the Lochiel Progress Association and the Federal Government’s Building Better Regions Fund. 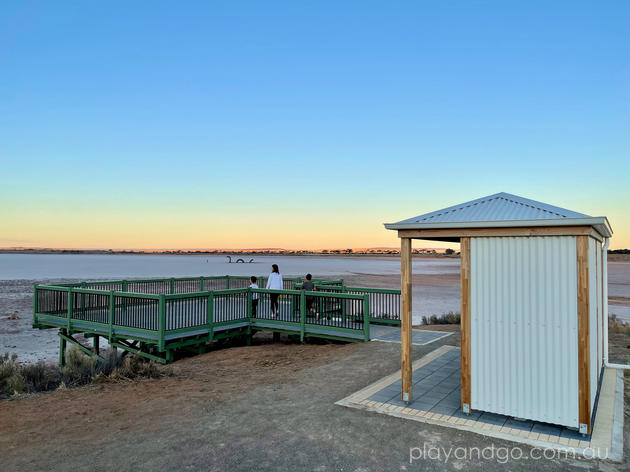 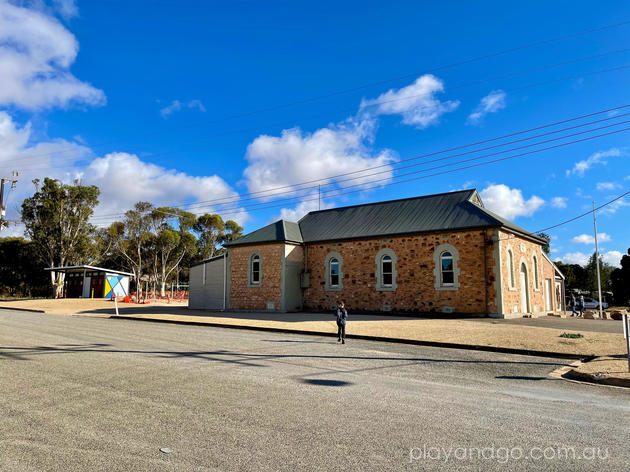 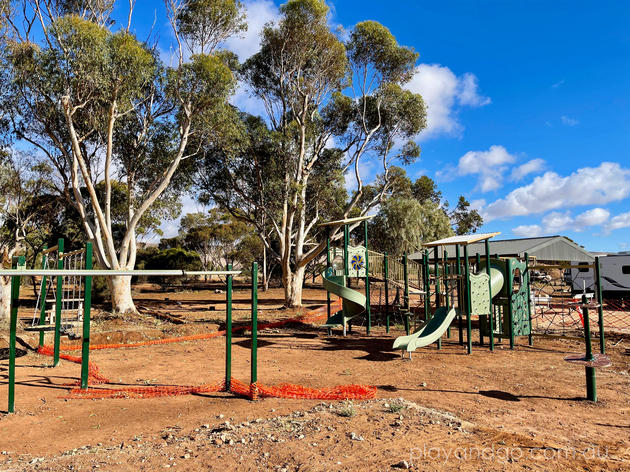 “Lochie” was created over a few years by mechanic Wayne Dennis from Broughton Bay Motors. It’s an improved twin of the old one further north, which was installed by a few farmers as a joke 30-odd years ago. Over time, parts of the old sculpture have been stolen or vandalised.

I headed to Port Broughton with the fam to speak to Wayne about his creation. 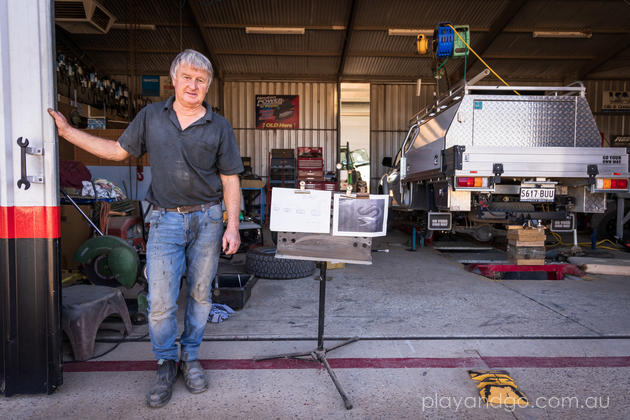 “Just about everyone who goes past Lochiel knows the one that’s out there with the tyres. Everyone looks for it. My mum used to live at Lochiel and, after I’d heard the [monster’s] head had gone missing, I thought, well, this could be a good time to make something better and put it closer to the town. I thought if we can make something bigger, it’ll put Lochiel on the map.

So, I started thinking about what I could make it out of. Originally, I was going to use a TV tower, and thread all these tyres on there. I knew it had to be a cross between a Loch Ness monster and a prehistoric eel because it’s Loch-Eel [pronounced like the town’s name].” 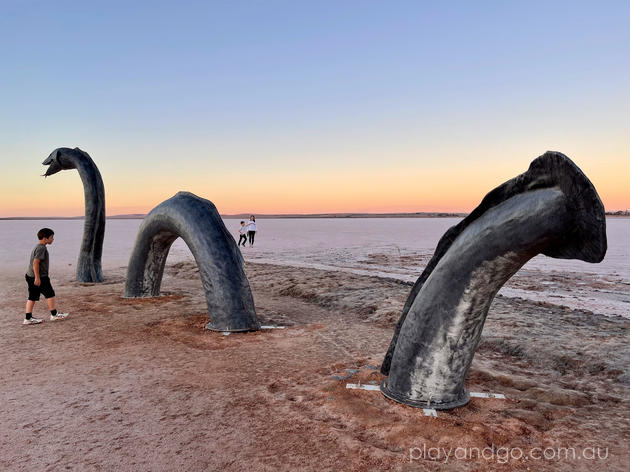 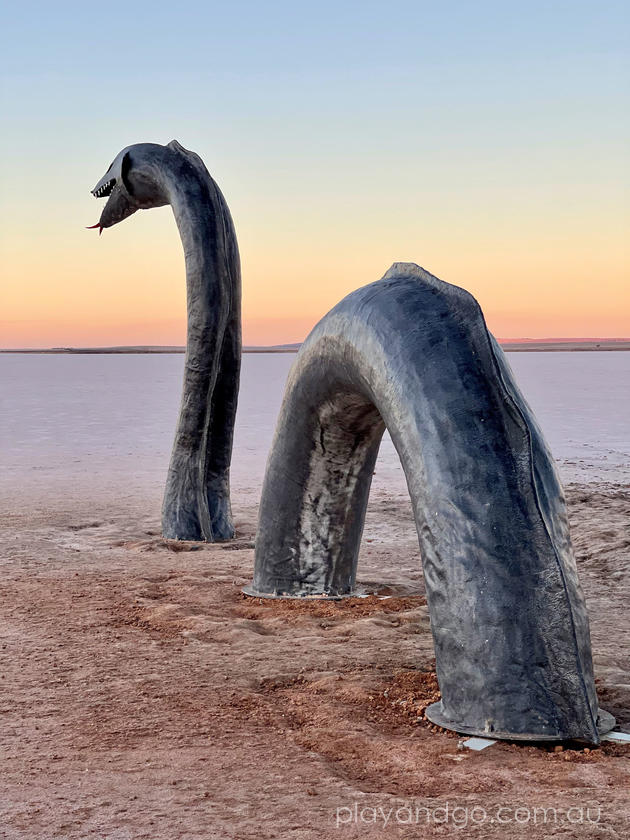 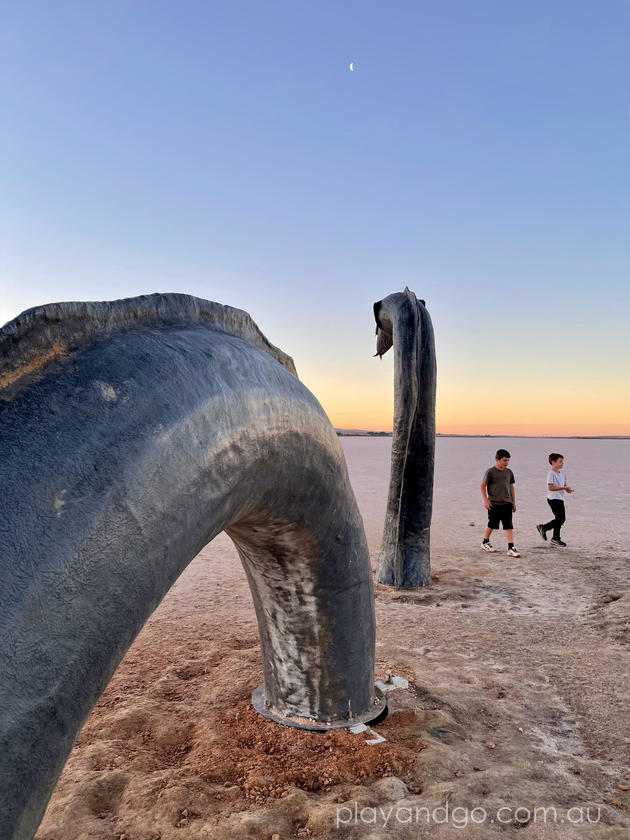 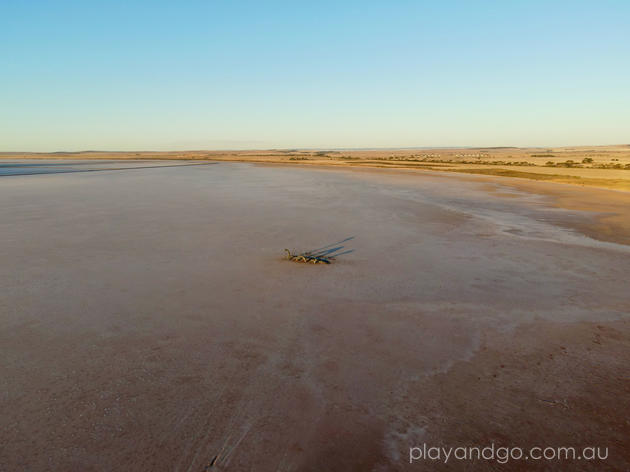 Wayne says his plans grew when the council “got wind” of the idea and put in for a grant. In the end, he used fibreglass and paper mâché, built around a stainless-steel rod and wire mesh. He worked on the sculpture, on its side, in his garage over many nights and weekends.

While Wayne says “I’d never fibre-glassed anything in my life before”, he quickly learned the art.

“The fibreglass skin actually turned out right because it wasn’t all smooth; it was sort of rough. With the help of grey and black paint, it made it look like skin.”

Inspiration, however, first began with the monster’s eye.

“I had a red reflector, the same as what’s on the signposts on the road. I thought that would make a good eye. So, I made the whole thing in proportion to that. I also wanted to make it high enough so if you’re standing in front of it, you can’t reach up and pull on its mouth … The mouth opens and shuts. I’ve made a funnel, so that when the wind blows on it, it opens the mouth, and when the wind stops, it shuts it.” 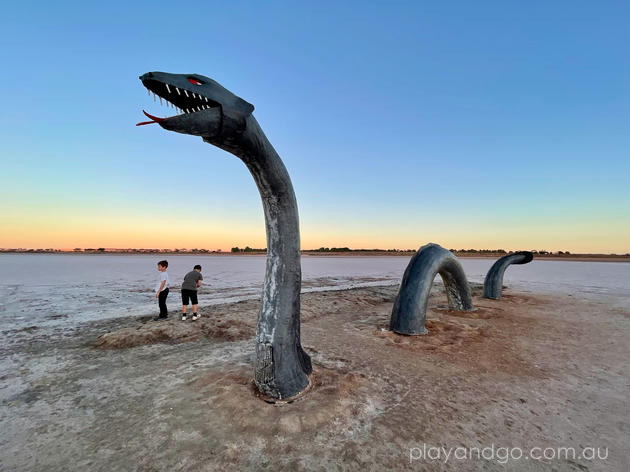 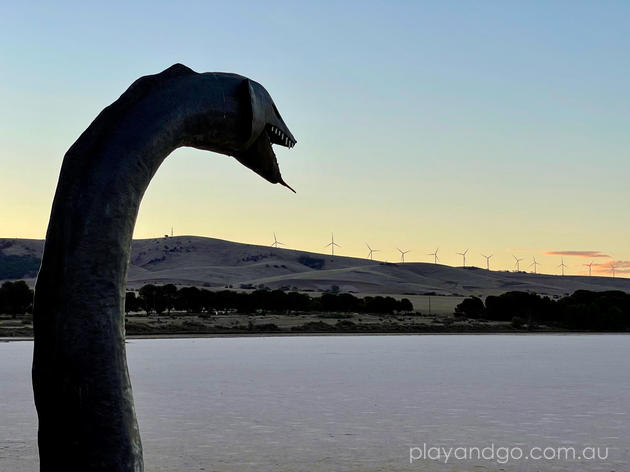 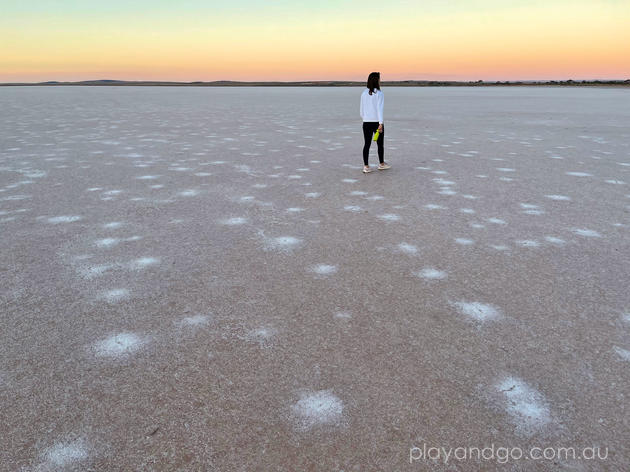 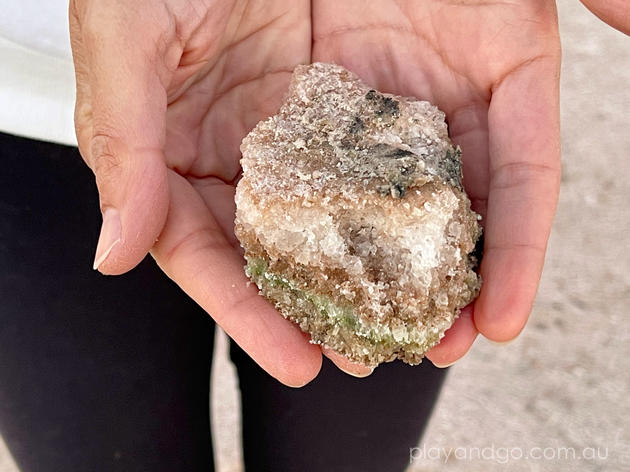 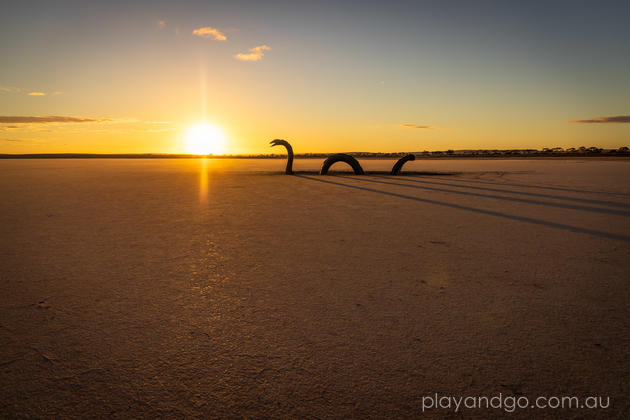 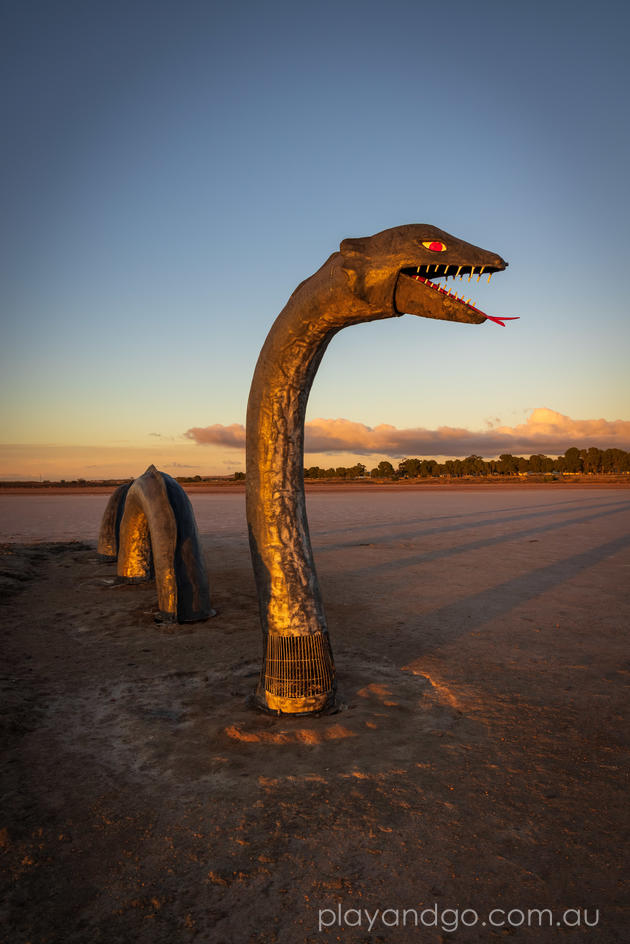 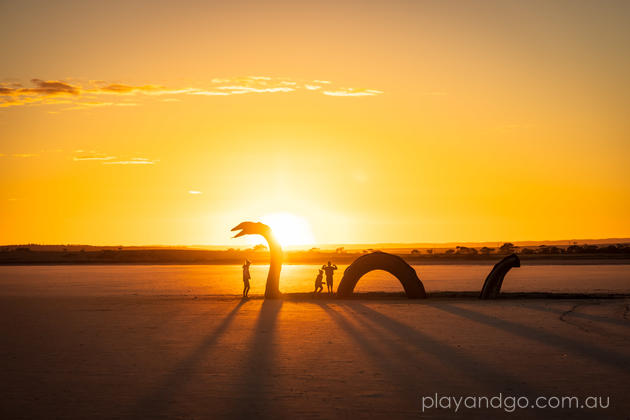 It took two trailer-loads to transport the completed sculpture – about 4m high and 10m long – to its new home.

“I spent lots of nights thinking about how we were going to put it in the ground,” Wayne says. “In the end, I came up with the idea of digging holes, putting tractor tyres in there, and backfilling them with dirt. Tractor tyres won’t rot away – they’ll last forever – and there are stainless-steel rods going through it. So, hopefully, it’ll last a long time because it’s in real salty water.”

Wayne’s also behind a horse-riding soldier art piece, below, at the Lochiel Memorial Hall. 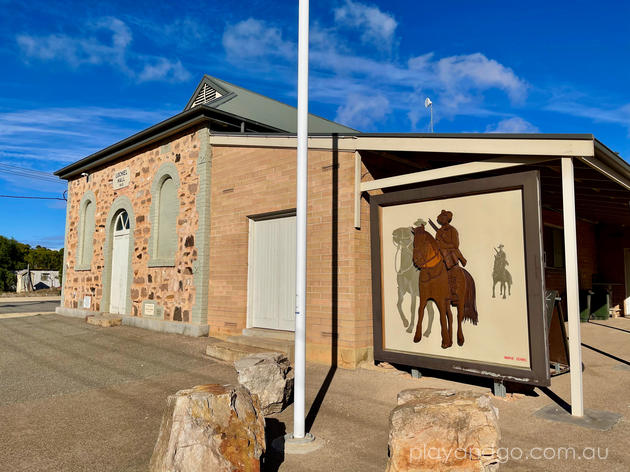 His current art project, meanwhile, is crafting replica machine guns for the façade of Bute Soldiers’ Memorial Hall. (The real guns were stolen, then found by police, and are now kept under lock and key.)

We stayed at the Pink Lake Tiny House – read our review here. 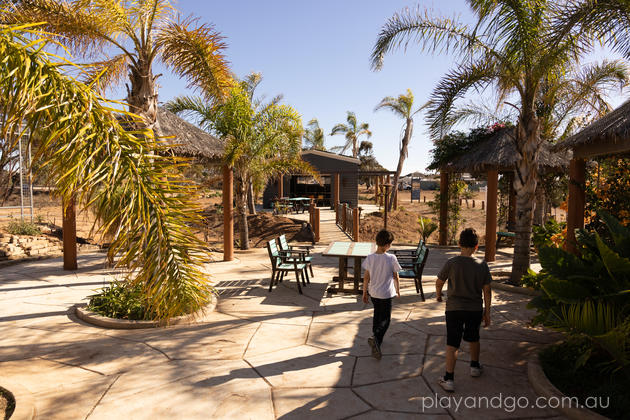 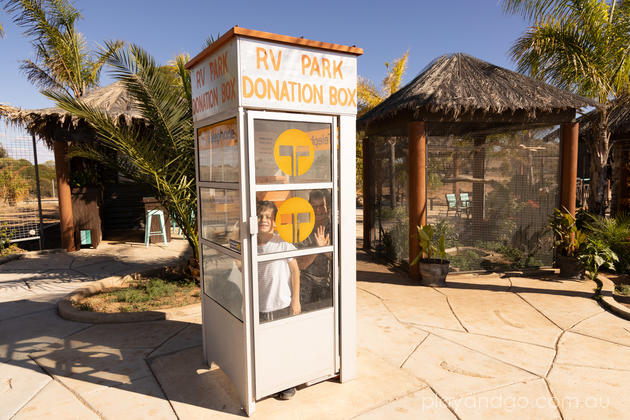 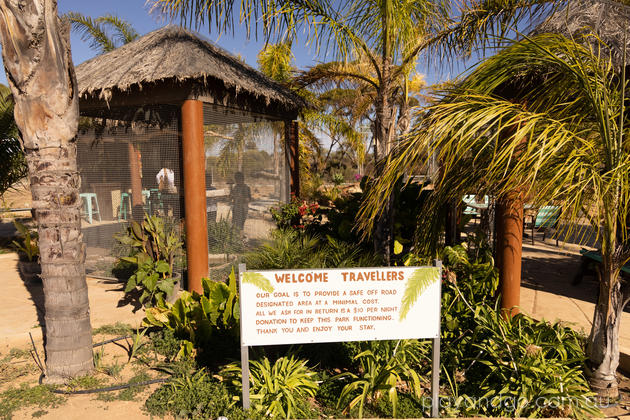 Jitter Bean Oasis café is just across the road from the new Loch-Eel monster – and its fare is wonderful, homemade goodness. Owners Vicki Myhre and Heather James have been at the helm for eight years. On the location, Vicki says:

“I think the biggest drawcard is the view and the sunrises. Just about every morning, except when it’s overcast, you get a brilliant sunrise. I’m fascinated; I still go out there and take pictures and go, ‘Oh, look at that!’ It’s something you never get tired of. I know for Heather, when it’s flat out and she’s at the coffee machine, she just looks out across the lake and it calms her.”

(By the by, the café’s now on the market, if anyone’s looking for a lake change! Vicki and Heather have plans to retire to a log cabin in Victoria, where they’re originally from.)

What:  Visit to ‘Lochie’ the new Loch-Eel monster

When:   Anytime – although, sunrise and sunset are particularly good times to take lake pics!