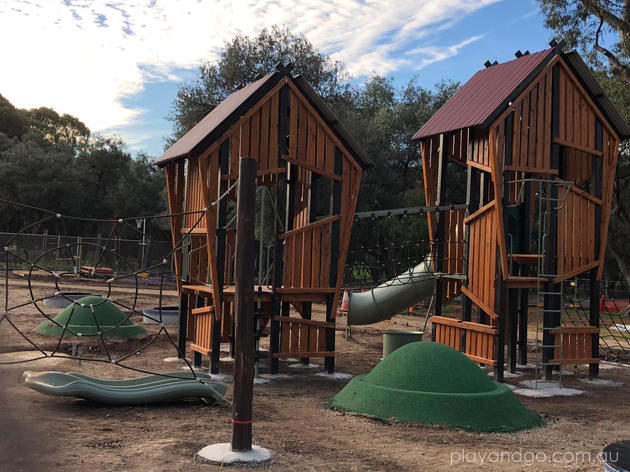 Check out what’s happening at the Glover East new playspace in Adelaide. 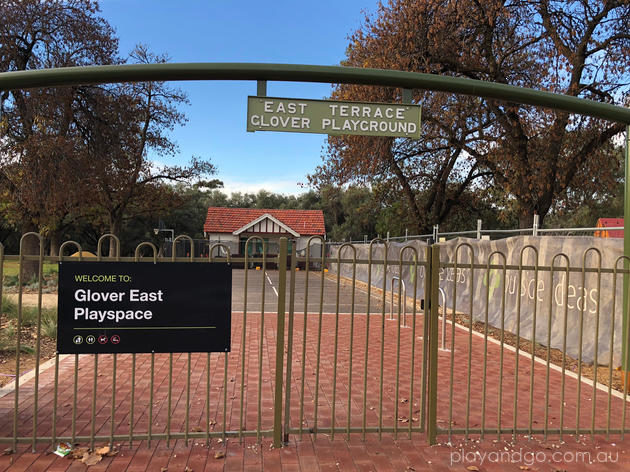 After community consultation mid-2016 here are the proposed elements in the new design:

The project has been undertaken in two parts; last year they focused on landscaping and this year they have upgraded the amenities block and playground.  Last year’s works are open to the public and features new turf, rubber soft-fall covered mounds, hand-ball courts, a netball and basketball ring, seating, BBQ, a new entry, signage as well as seating areas under the olive groves.

They are also upgrading the amenities block to include 4 toilets, including 2 which are DDA compliant, and a services room while maintaining its heritage character.  The City of Adelaide is looking forward to being able to open the new playground to the public, which they expect to be completed by the end of June.

See all our photos below of how it’s all progressing. 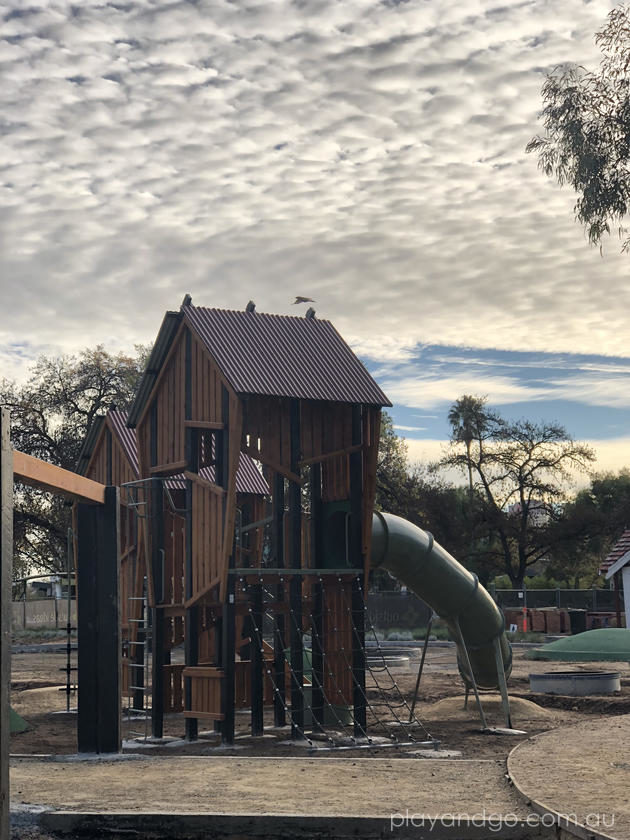 We love the look of these cute tree houses offering plenty of climbing options and imaginative play. They look to be the same or similar to the ones at Bell Yett Reserve playground in Wattle Park. 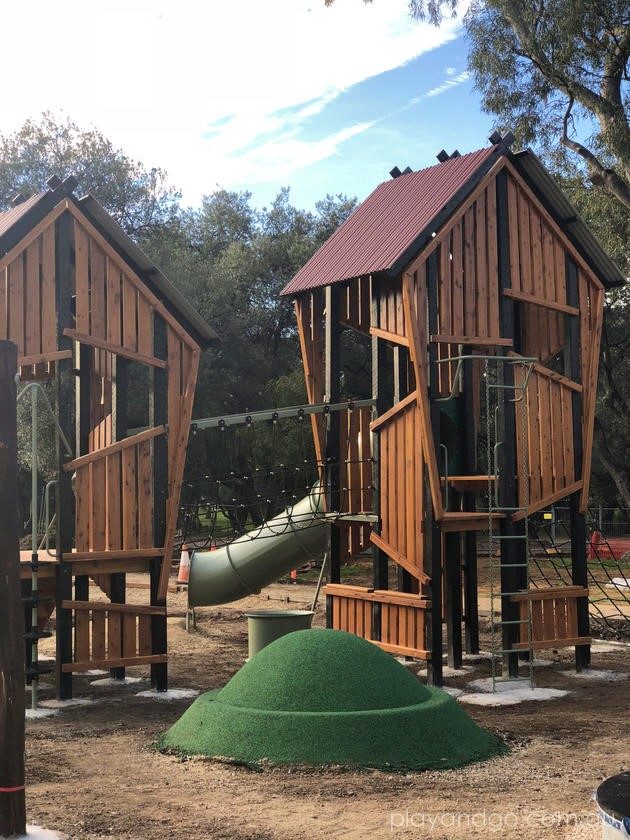 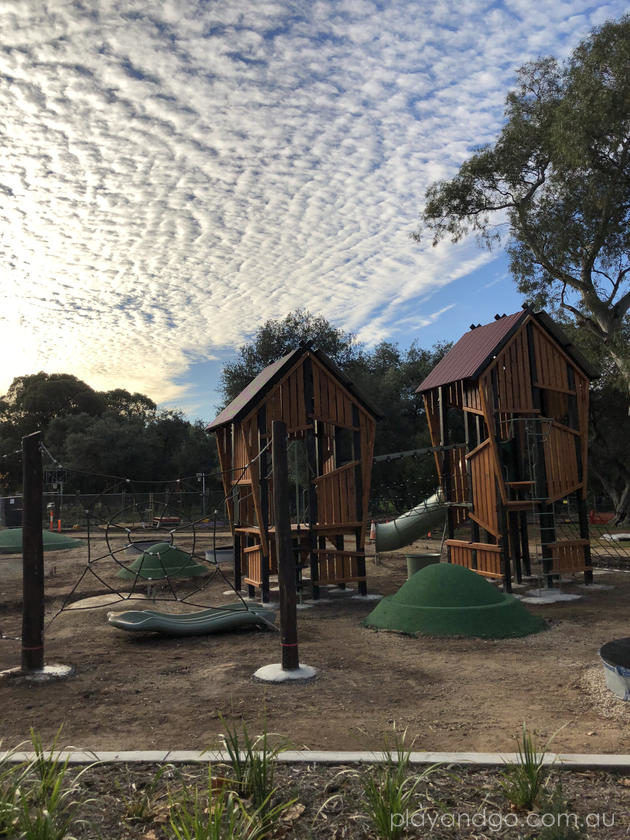 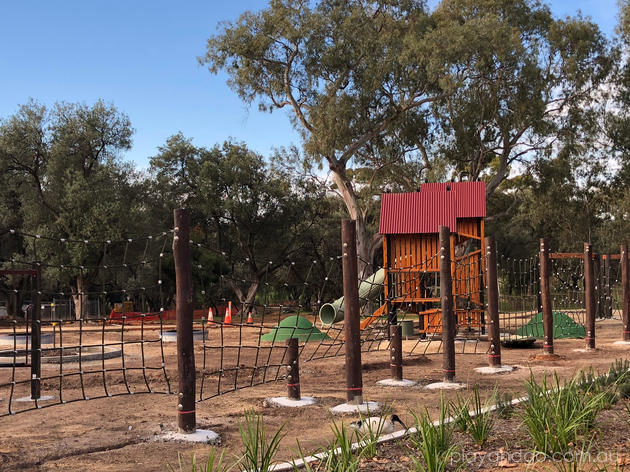 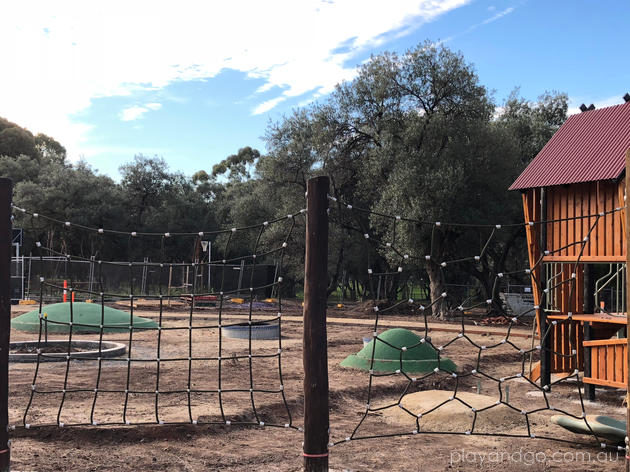 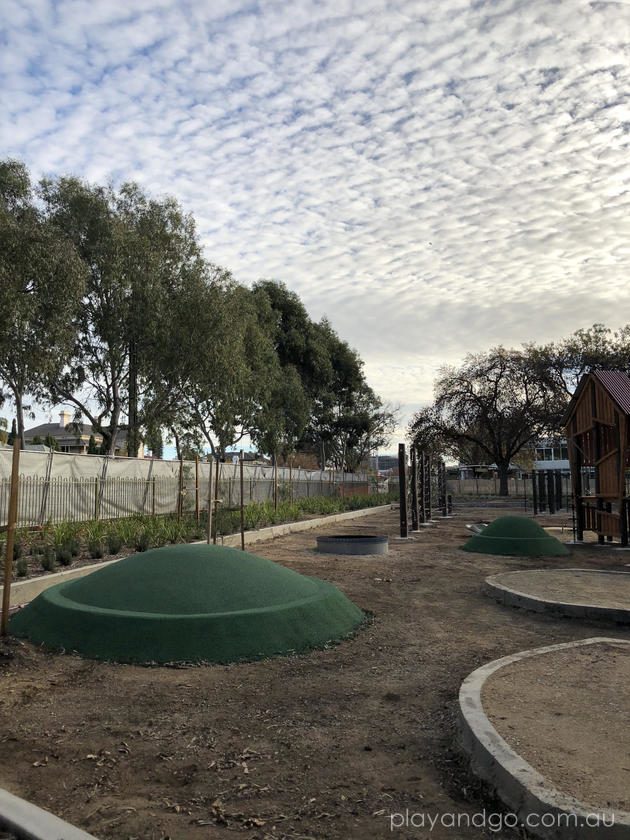 The playground incorporates equipment using natural products, including plenty of timber, and looks to have many great nature play elements. 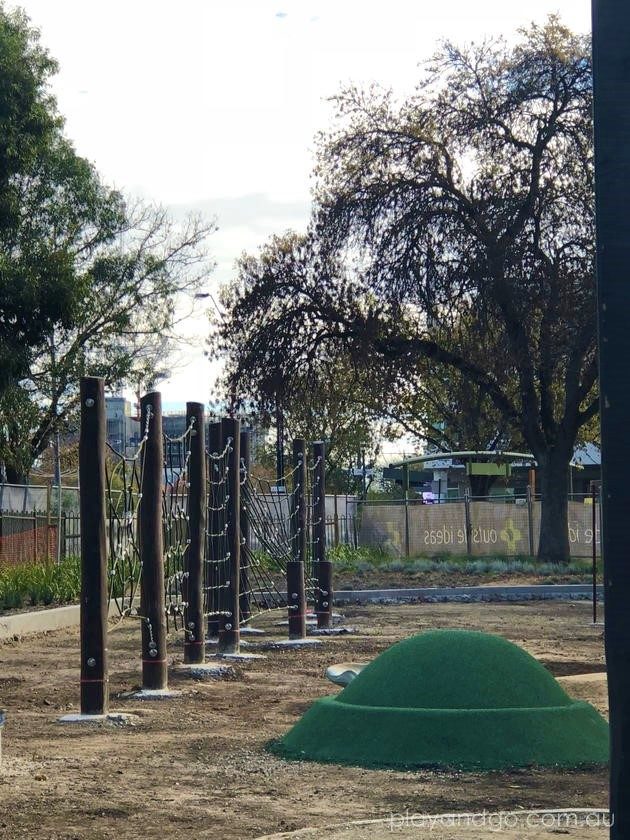 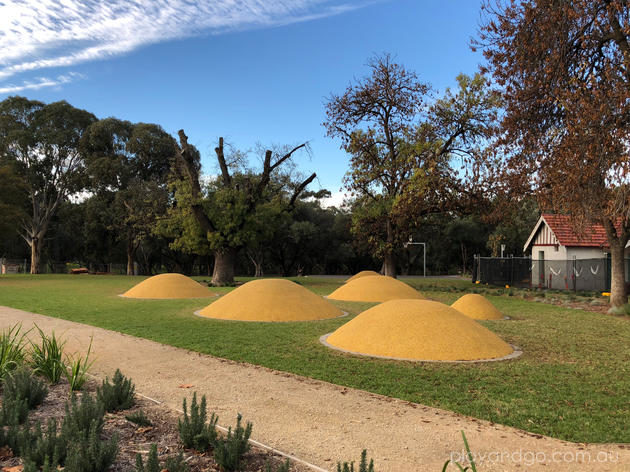 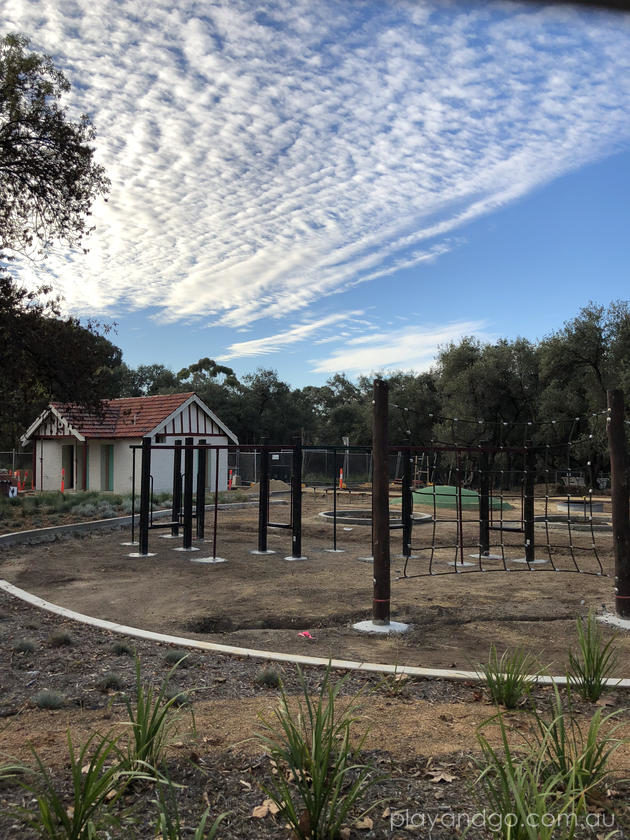 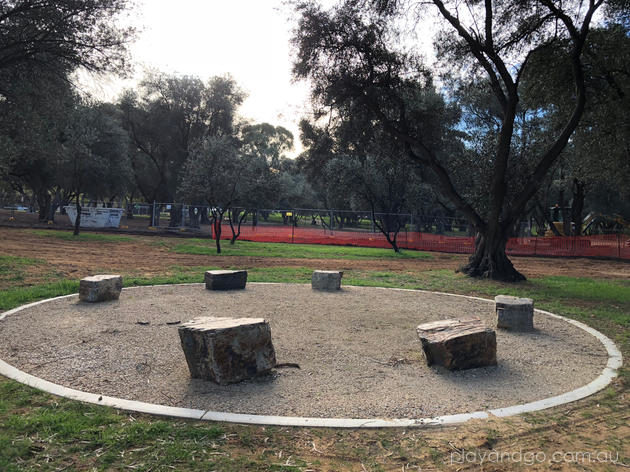 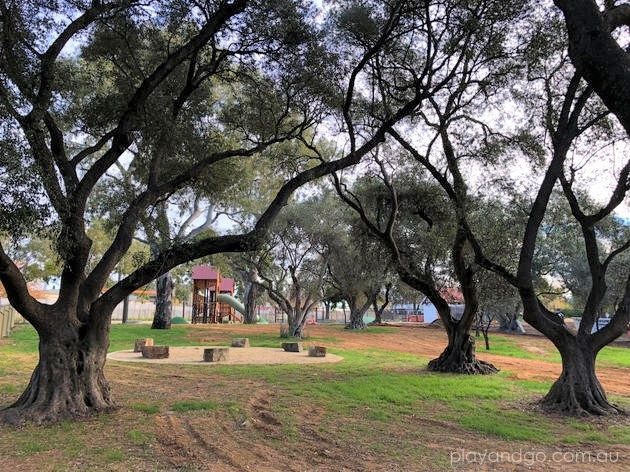 The playspace is very close to the skate park that is just down on Wakefield Rd, with Rymill Park just over the parklands and Victoria Park across the road. At Victoria Park there are three cafes you can grab coffee and a bite to eat: Kiosk on 16, Velo Precinct and recently opened, The Stables of Victoria Park. Rymill Park also has the kiosk there and of course the playground and boat rides. Heading towards the city, there is Bocelli Caffe on the corner of Wakefield Street and Hutt Street.

Some interesting facts about the history of East Terrace Glover Playground:

Did you know it was one of the first child-care centres in Adelaide?

The playground was opened on 11 September 1925, and was partly funded by Lord Mayor Charles Glover.

The Governor-General Lord Forster said at the time of opening that “There is no city that I know of where so much has been done to provide playgrounds for the children of Adelaide.”

Lord Mayor Glover contributed over £2,000 to the playgrounds of Adelaide, also paying towards the Glover Playgrounds on South Terrace (1918) and in North Adelaide (aka ‘the Helicopter Park’) on Lefevre Terrace (1920), which is why they all carry his name.

The early Park Lands playgrounds included a woman supervisor. Like other playgrounds at this time, a supervisor was paid for by the Education Department who had an office in the shelter shed and a direct telephone line to the police. The play areas were segregated by age and sex.

It was common for parents to leave their children at the playground for long periods while they were working – therefore making them our first child care centres.

The original playground was designed by August Pelzer, City Gardener from 1899 until 1932. His designs guided planning throughout the Park Lands and had a significant impact on how they look today. The sign, shelter shed and symmetrical tree plantings remain from the original layout of the playground. The new hub at Marshmallow Park on Glen Osmond Rd has been named Pelzer Park /Pityarilla Activity Hub in his memory.

Forgotten what the old playground looked like? Here are a couple of pics from the City of Adelaide website: 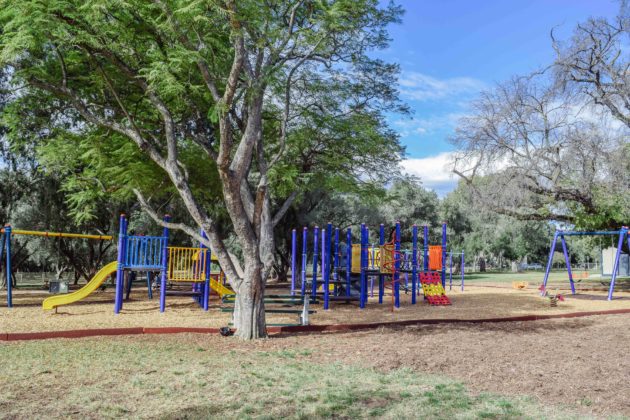 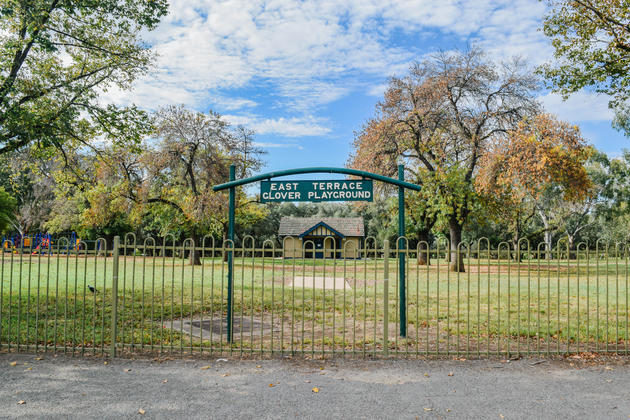 CLICK HERE to see our Top Parks & Playgrounds Around Adelaide

For more information and all enquiries please visit the City of Adelaide website.

Image Source: All photos by Play & Go Adelaide except where indicated

Tones And I will be performing in Rundle Mall toda

How magical to have SA’s Gallipoli Beach all to