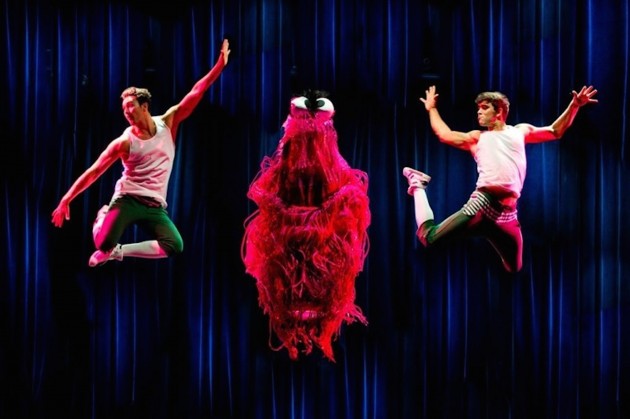 The show began before the show! In the 10 minutes of so before the Brat Kids Carnival was due to start, it’s MC, a friendly and welcoming Fez was already interacting with the crowd – repeatedly offering water as it was a high 30’s day, playing banana throwing games with one of the stars of the show ‘Mr Monkey’, involving the audience in ‘catch banana in your mouth’ game… it felt like bonus value for the ticket price.

And THEN the show really began, but first with an invitation for any kids to storm the stage and have a boogie. Fez and Mr Monkey had a dance too and ended up being led by the star of this little moment, a 2-3 year old girl who was having too much of a ball to leave the stage! The stars encouraged the crowd to cheer for her and it set the scene for a very equal feeling relationship between audience and performers. I loved the humility of this.

The Brat Kids Carnival is a high energy, circus-themed cabaret for the little ones, but equally enjoyed by the grown ups – truly! The talented, all-male group shared the spotlight, using the trapeze, skipping ropes, hula hoops, break-dancing and juggling, as well as plenty of comedy and charisma.

They were incredibly talented and there were plenty of awe-inspiring moments, particularly with the Mr Monkey’s flaming hula hoop – it appeared to be about 90cm in diameter and yet he could jump his whole body through it, flipping it over his head and jumping through again. And the trapeze work was brilliant too by Space Cadet and Thomas Warrell.

Biggest laughs from my 10 year old companion came during the piece by opera singer from outer space ‘Marjorie’; a character in dress up (see red costume above) who was assisted by the other men using feathered fans to enhance her dramatic singing performance.

As well as being fantastic fun, and gob-smacking with some of the circus tricks, there were some great messages coming through from Fez the MC. Namely, a lot of the tricks are using every-day objects, so pop along to Bunnings, buy some cheap hose pipe, tape it together and decorate it in your favourite colours and there you have your own hula hoop! “Cheaper than a pilates class” he said, in a nod to the mums. I’m a bit inspired! And also, when introducing one of the performers, a recent graduate of circus university, he made the point that there are study options for those kids who want to grow up and join the circus. I thought this was a great message to many kids who might be thinking they want to be involved in the arts when they grow up.

I highly recommend this fantastic and edgy show, that will keep the parents highly entertained as well as the little people. Audience members are really welcomed to interact and I think hundreds of kids will be leaving the Fringe feeling inspired to get active and creative at home with hoops and skipping ropes, or just rolling hats across their shoulders and incorporating the moves into juggling routines. 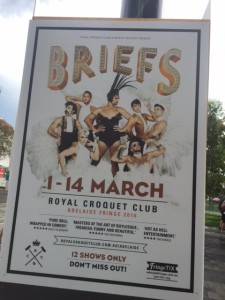 Funnily enough when we left the Panama Club to enjoy some of the wider attractions of the Croquet Club, my 10 year old chose to do a bit of mini golf and I found myself face to face with some sequins and feathers in ‘Briefs’ poster. I scanned the faces and realised they were all from the Brat Kids Carnival! I had a real ‘Wow’ moment and thought it all made sense that they were such talented, engaging, charismatic artists… by night they are part of a ‘Boylesque’ cabaret act, which I now want to see!

Go see the Brat Kids Carnival – you’ll have a ball!