Create an Entry for the 2013 Adelaide Kids Film Festival 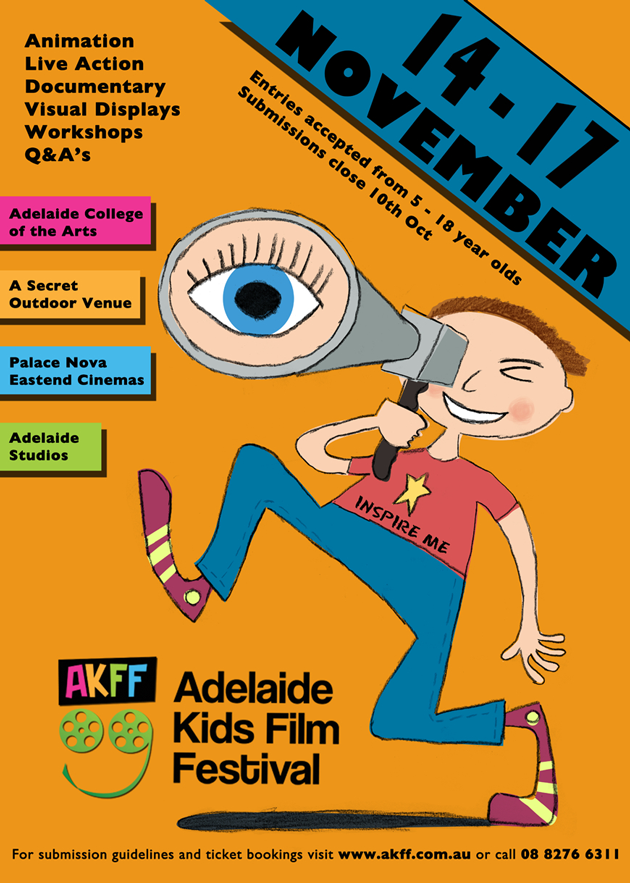 Winners  will  receive  prizes  including  cameras  and camera  equipment  to  kick  start  their  filmmaking  career  as  well  as  movie  passes,  filmmaking  vouchers, digital  equipment and  more.   Filmmakers  whose  films  are  selected  for the  festival  will  have  free  entry to  the  screening.  The  eye-­‐catching  poster  for  this  year’s  festival  was  designed  by  William  Joyner,  10,  from  Strathalbyn as  part  of  a  competition  held  last  month,  which  drew  entries  from  all across  South  Australia.

With  the  Adelaide  Kids  Film  Festival  attracting  more  entries  from  across  Australia  and  overseas  year after  year,  organisers  are  expecting  this  year  to  be  the  biggest  yet.  Previous  years  have  seen  entries come  from  far  and wide including  Japan,  Tibet  and  Columbia.  Films  start  with  a  great  idea  and  kids  have  so  many  of  them – their  creativity  is  endless!

The  Adelaide Kids  Film  Festival  is  all  about  capturing  that  creativity  and  celebrating  it,”  says  festival  director  Chloe Gardner.  The  festival  is  backed  by  big  names  including  Emmy  Award  winning  film  director,  Mario Andreacchio, and  internationally  acclaimed  singer  and  songwriter  Sia  Furler,  who  have  been  patrons  since  its inception  in  2011.

For a look at a selection of films from last year – including the winning entry, Kiddo, by Alice Wheaton plus interviews with entrants, click here.

What:   Create an Entry for the 2013 Adelaide Kids Film Festival

Where:   Send your entries directly to Adelaide Kids Film Festival

Click here for more information, including all question about entering.

The  Adelaide  Kids  Film  Festival  is  an  annual  film  festival  for  kids  by  kids.  The  Festival  aims  to  encourage,  foster  and nurture  an  appreciation  for  digital  storytelling  by  young  people.  Held  over  four  days  at  the  Palace  Nova Cinemas, Adelaide  College  of  the  Arts,  Adelaide  Studios  and  the  parklands  for  the  outdoor  screenings  in  November  (14-­‐17), the  festival  creates  a  stimulating  environment  where  young  filmmakers  can  mix  with  professionals, showcase  their work,  be  rewarded  for  their  talent  and  develop  their  craft  in  an  arena  to  encourage  both  critical  thinking  and  the  joy of  play.