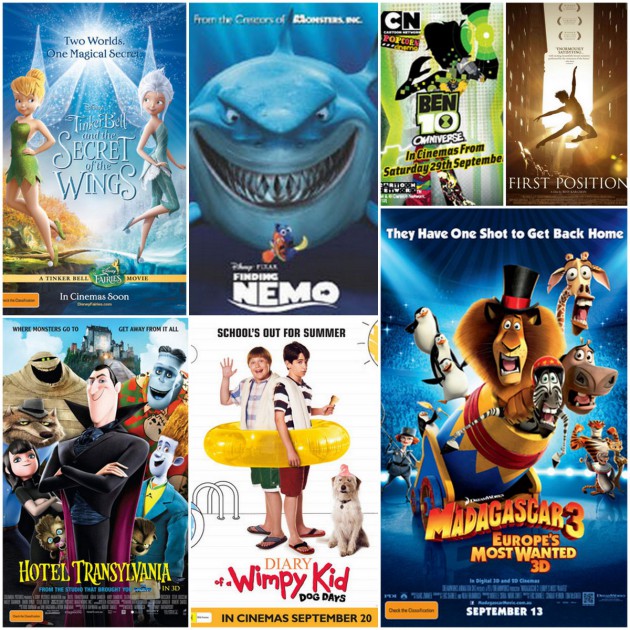 The movies are always a great option during the school holidays, so here’s a summary to let you know what’s showing for kids during our Spring break.  Check your local guides (newspaper/websites) for daily dates and times.  Movies are showing at Hoyts and/or Event Cinemas.

Nemo, an adventurous young clownfish, is unexpectedly taken to a dentist’s office aquarium. It’s up to Marlin (Albert Brooks), his worrisome father, and Dory (Ellen DeGeneres), a friendly but forgetful Regal Blue Tang, to make the epic journey to bring Nemo home.

Journey with Tinker Bell and her fairy friends into the mystical and forbidden world of the Mysterious Winter Woods, where curiosity and adventure leads Tinker Bell to an amazing discovery that will not only change her life forever, but will eventually unite the warm and cold seasons, bringing all of Pixie Hollow together.

Ballet documentary following six young dancers (aged nine to nineteen) over the course of a year as they face injury and personal sacrifice on their way to compete in the Youth America Grand Prix.

Alex the Lion, Marty the Zebra, Gloria the Hippo, and Melman the Giraffe are still fighting to get home to their beloved Big Apple and of course, King Julien, Maurice and the Penguins are all along for the comedic adventure. Their journey takes them through Europe where they find the perfect cover: a travelling circus, which they reinvent – Madagascar style.

BEN 10: OMNIVERSE is the latest installment of the hit Cartoon Network franchise. With Gwen and Kevin out of the picture, BEN TENNYSON looks forward to being a solo superhero with his brand new OMNITRIX. (Showing at Hoyts, Tea Tree Plaza)

During his summer vacation, “Wimpy Kid” Greg Heffley, the hero of the phenomenally successful book series, hatches a plan to pretend he has a job at a ritzy country club – which fails to keep him away from the season’s dog days, including embarrassing mishaps at a public pool and a camping trip that goes horribly wrong.

Welcome to the Hotel Transylvania, Dracula’s (Adam Sandler) lavish five-stake resort, where monsters and their families can live it up, free to be the monsters they are without humans to bother them. On one special weekend, Dracula has invited some of the world’s most famous monsters – Frankenstein and his bride, the Mummy, the Invisible Man, a family of werewolves, and more – to celebrate his daughter Mavis’s 118th birthday. For Drac, catering to all of these legendary monsters is no problem – but his world could come crashing down when one ordinary guy stumbles on the hotel and takes a shine to Mavis. 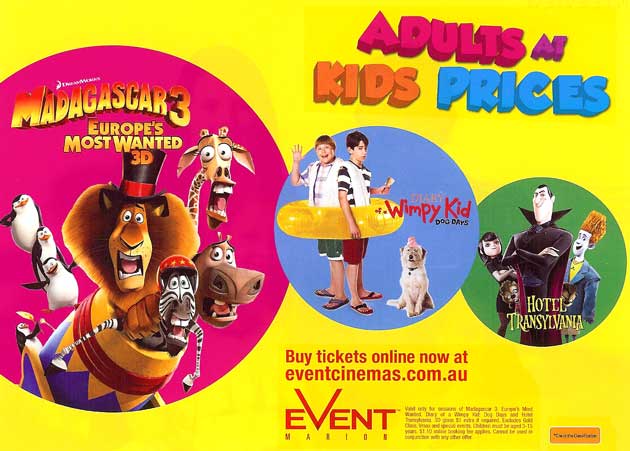