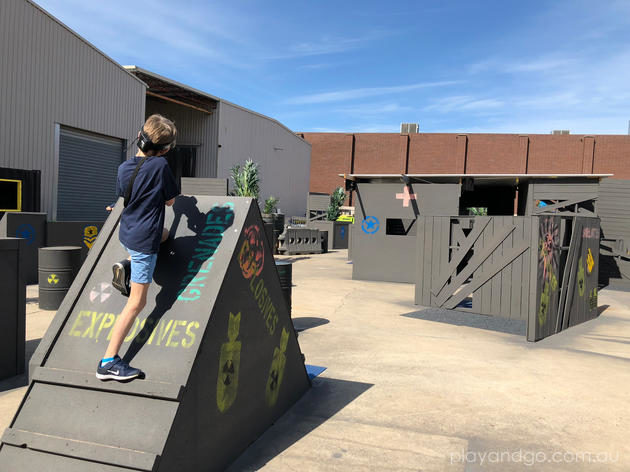 For Mr 10’s recent birthday party, guests received invitations asking them to “Jump off the Battle Bus to tackle the obstacle course, survive dodgeball and blast through laser tag”. Some clues here that this was going to be a very active party. And it was!

When looking for a party option for a Fortnite fan, laser tag was the obvious choice. The boys were pretty excited when they saw the set up of the new Laser Tag arena at Mega Courts. It’s a huge outdoor arena, 2,500 sqm in fact, with plenty of hiding spots and ”battle stations”. It’s recommended for ages 7 years +.  This was a surprise as up until recently Mega Courts had been all about indoor sports only. 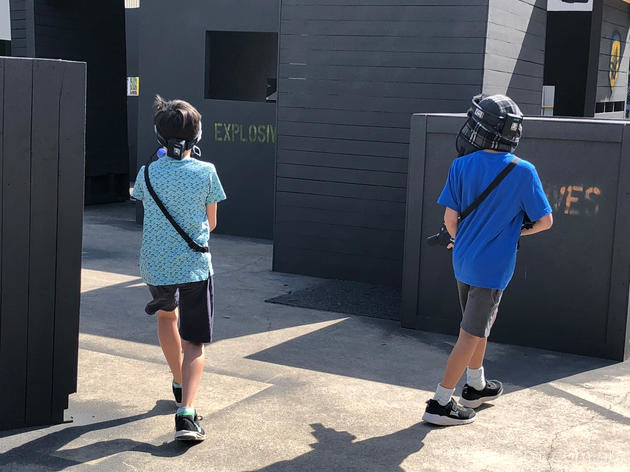 There are home base forts at both ends for two competing teams, and in between, the battle ground consists of an obstacle course with plenty of hiding nooks. The laser guns are like high end Nerf blasters, and easy to use. It was great to get the kids off the screens and running around outdoors having fun. Even the non-Fortnite players enjoyed it. Our kids played a couple of games in two teams (we had 18 altogether) and then a couple of games as individual players. They had a quick info session at the start to show them how the equipment worked. 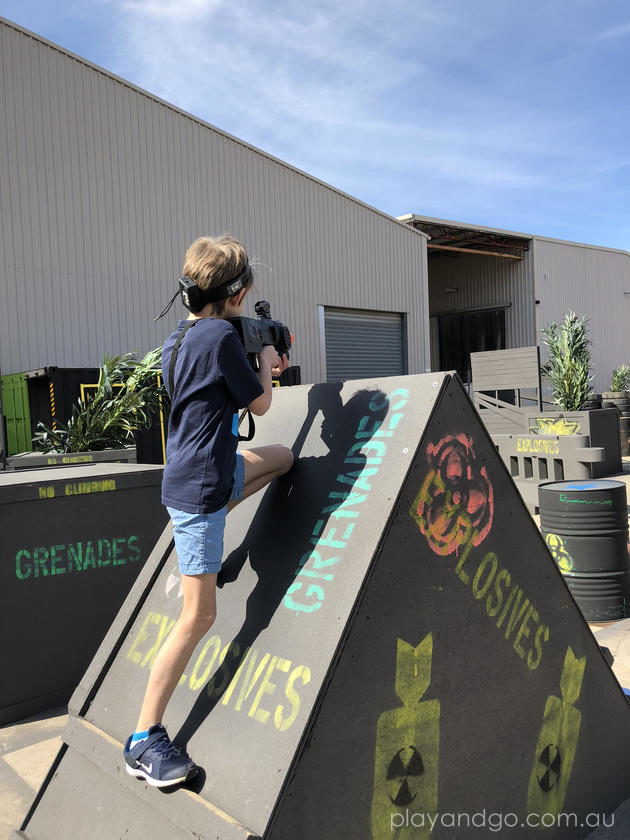 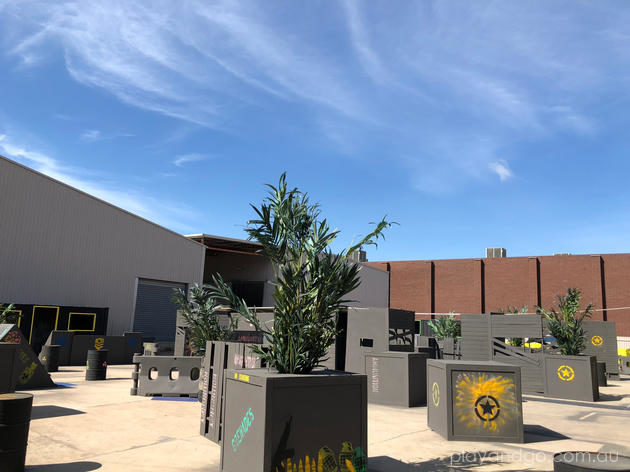 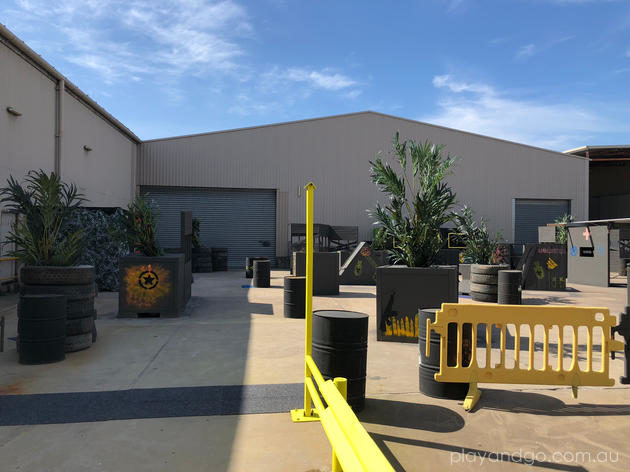 The Laser Tag session lasted about an hour, after which the kids were ready for some refuelling with food and drinks.

We had platters included in the package and chose the following: chicken nuggets & chips, fruit platter, pizza, sausage rolls & pies, along with different flavoured cordials and water. We also ordered a platter of Asian finger food for the adults which the kids kindly helped us eat too. The generous servings were demolished fairly quickly by these hungry boys.

Mega Courts is a large venue so they have plenty of room for long tables perfect for parties. While we had two large tables allocated to us, the kids preferred to fit in around the one big table of food. The extra table is handy if you have parents or family stay at the party. We were also able to use another separate table for presents and an additional small square one for the cake.

The staff were very accommodating and super helpful with supervising the kids and facilitating the activities. For example, they kept a check on how many were there when some had gone to the toilet, and made sure that everyone was ready before moving onto the next activity. 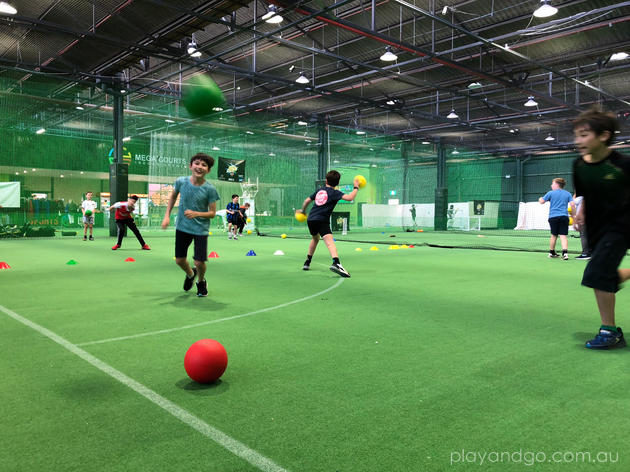 Dodgeball is one of Mr 10’s favourite games so the boys played a few games of this in one of their indoor courts. The games were fast so players weren’t standing out for very long before joining in again. 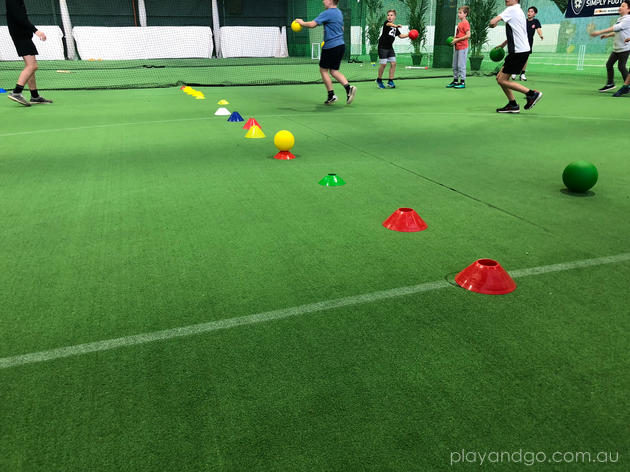 The next stop was the Inflatable Course. The kids had free reign to run around, climb, slide, bounce and crawl all over these inflatable structures. 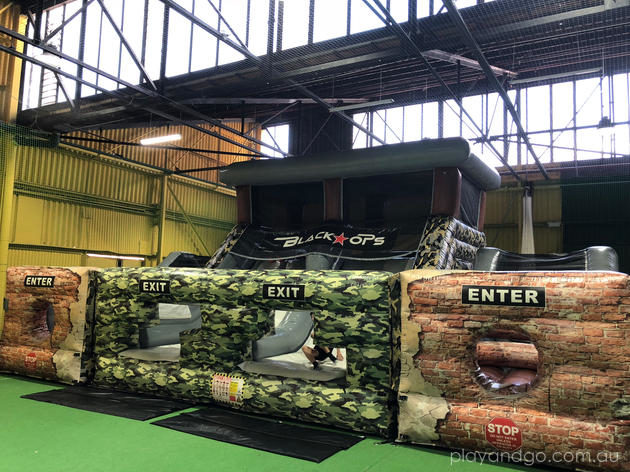 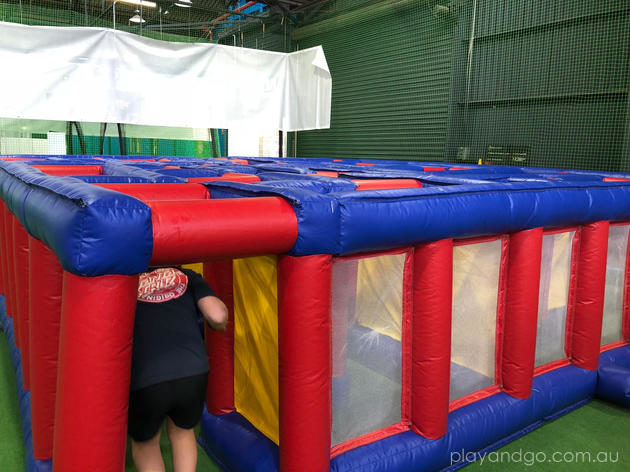 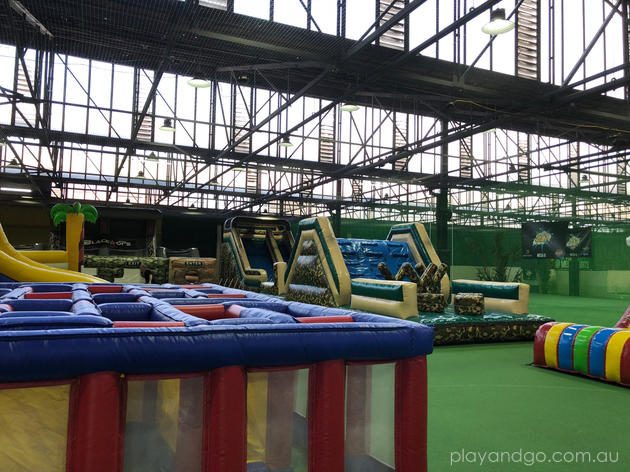 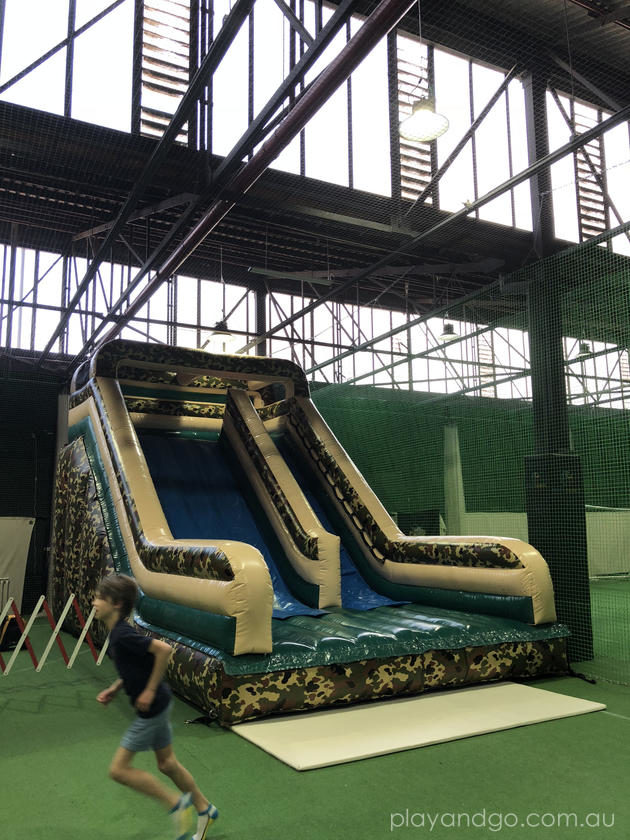 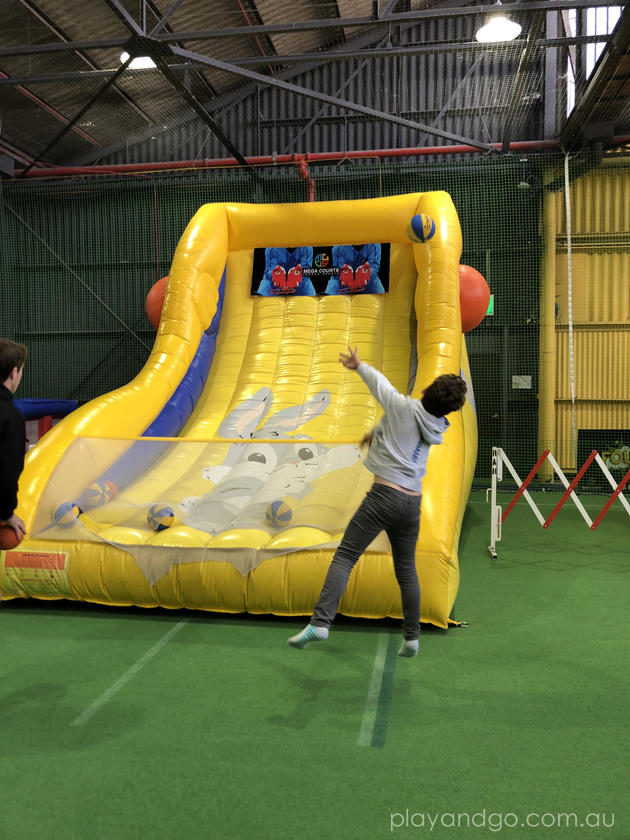 Mega Courts is a great venue for a kid’s birthday party. Even with other parties happening at the same time, it’s a large space and each party is doing a different activity so it doesn’t feel too busy. There are many long party tables as well as other smaller tables around the cafe for parents and guests to sit. Pictured below is a great table set up we saw on the day we were there for an eight year old. 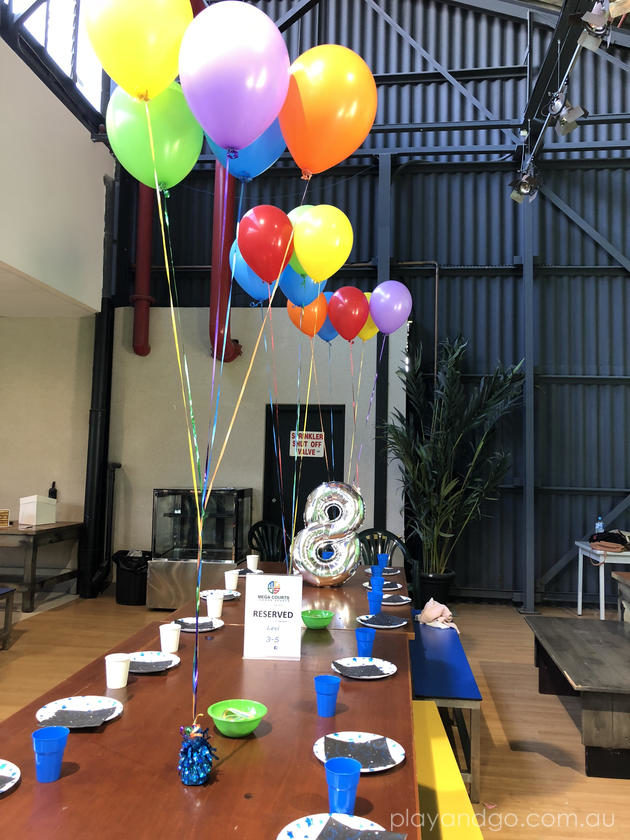 Near the end of the party we did a DIY party bag activity. Basically, all the treats were laid out onto two large platters (pictured below). We gave each child a party bag and let them fill it up with their choice of treats. Firstly, this means you don’t have to prepare party bags yourself (win!), and secondly the kids get to choose the things they like.

Plus it’s a fun party activity. To avoid it being a hot mess, we made the kids line up and grab three things at at time, taking turns. One line for each platter.  Our party host was very helpful once again – he kindly helped write each child’s name on their party bag so that there wouldn’t be any mix ups, while I was getting the birthday cake ready. 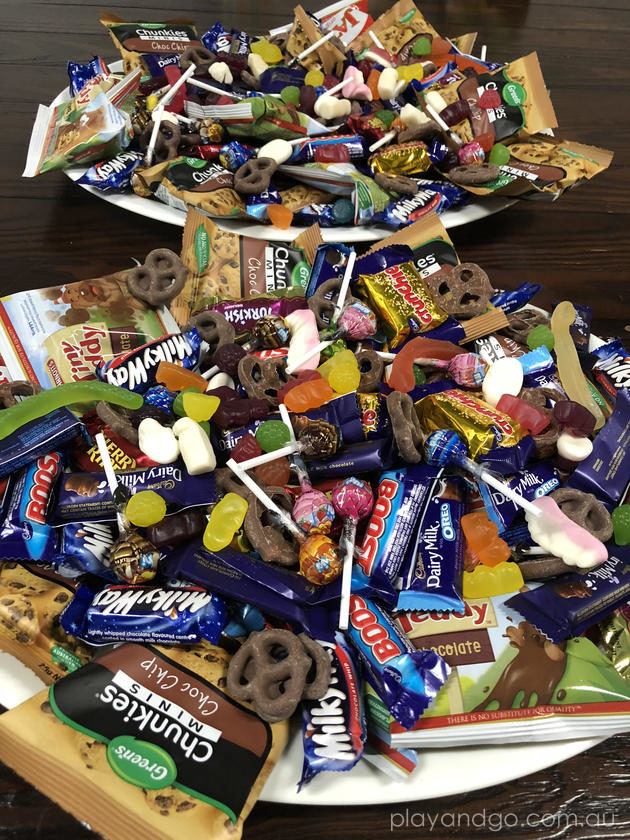 The birthday cake was a simple ice cream cake decorated with chocolate sticks around the edges, with lollies, macarons and strawberries on top. The mini bunting was made by printing letters and numbers on paper and cutting into folded triangles. They are glued onto string and tied onto skewers. 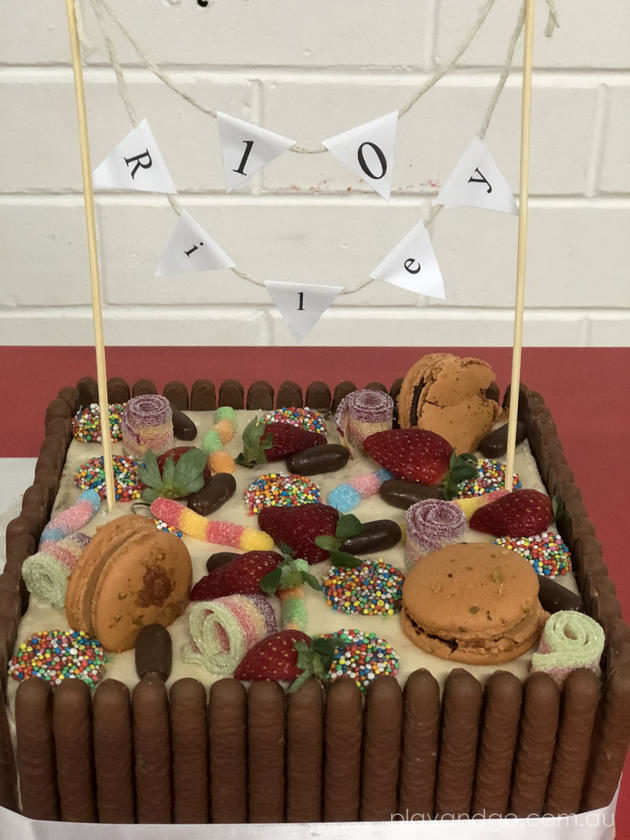 Mr 10 had a ball at his birthday party and declared it one of his best parties. I’ve also had a couple of the guests mention that they had such a great time at Mega Courts they also want to have their parties there too. That’s always a good indication that a good time was had.

This was a fuss free, easy party where everything is organised for you. It was great getting the kids running around outdoors in the Laser Tag arena and was super fun for those that were Fortnite fans. If Laser Tag is not your thing, or for younger kids, the parties with just the indoor sports and inflatables is also a great option – we have been to a couple of these parties in the past there.

The party package we had was the Elite Forces 2.5 hour party from the Mega Laser Tag party options.

For more information and all enquiries please visit the Mega Courts website here.

Who: Laser Tag parties are suitable for ages 7 +

As a media supplier of Mega Courts, Play & Go kindly received a discount for this birthday party, however the views expressed in this review are entirely the writer’s. 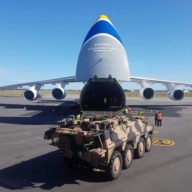 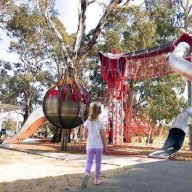 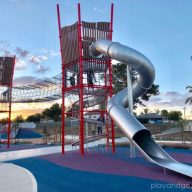 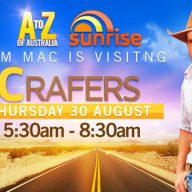 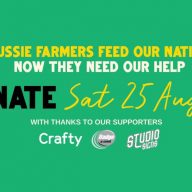 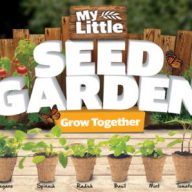