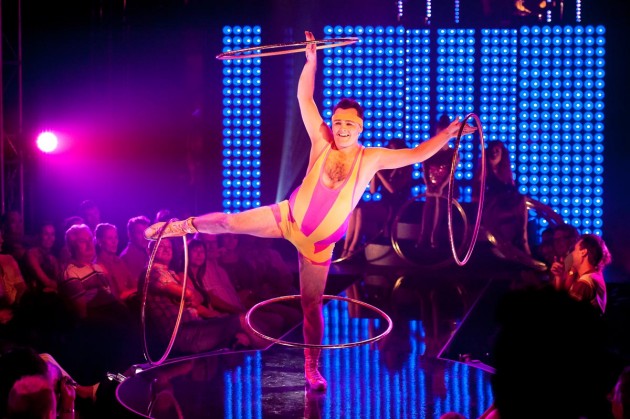 If you choose just one show to see during the Fringe without the kids, then let it be Velvet!

“After dazzling audiences around the globe, VELVET returns to Adelaide and continues to defy expectations with an electrifying trip to a world of glamour and abandon. A raucous and seductive fusion of disco, dance, burlesque and circus. It shocks, surprises and scintillates at every turn. It’s a party, it’s dangerous, it’s a showcase fuelled by an exhilarating disco soundtrack that never lets up from the opening moments.”

Every night during the Fringe, the Spiegeltent in the Garden of Unearthly Delights is being transformed into an explosion of disco. Velvet debuted at the Adelaide Fringe in 2015 and the high energy show won ‘Pick of the Fringe 2015’. Back in Adelaide for another captivating fringe season, the show transports audiences to a boogie wonderland where it’s hard to believe that you are instead sitting in a tent in the parklands of Adelaide.

The show is a heady mix of music, dance, acrobatics, circus, disco, cabaret and burlesque; it’s bright, it’s loud, it’s an assault on the senses and it’s fabulous! Fringe-goers were squeezed into the Spiegeltent like sardines for a sold out Tuesday night performance, but as soon as the music started (thanks to the DJ skills of the talented Joe Accaria) any woes of the tiny, uncomfortable wooden chairs were soon forgotten.

“VELVET is a nightclub and a state of mind – a fantasy. Inspired by Studio 54, a club famous for its wild parties and hedonism but also ultimately for its culture of acceptance – blind to colour, creed, class, gender, size, and sexuality. VELVET is a celebration of that freedom.”

The cast of nine all bring their different skills and strengths to the party, and there is no headline act – all nine are superstars in their own right and have their opportunity to shine. Marcia Hines is superb – her soulful and magical voice was mesmerising and genuine. The talented Brendan Maclean drew a musical narrative through the show, following his journey of discovery into this hedonistic world. We enjoyed dazzling performances from singer-dancers Chaska Halliday and Rechelle Mansour, acrobats Mirko Köckenberger and Stephen Williams, and aerialist Emma Goh. But it was the cheeky ‘hula boy’ Craig Reid who stole the show for me – is there anything this man cannot do with a hula hoop? Jaw-dropping skills delivered with such joy and surprise, I could not wipe the smile from my face whilst he was on the stage.

The musical line up will have you singing along from start to finish  – you’ll know every song, possibly every word as the hits keep on flowing. With familiarity coupled with mind-blowing performances and dare-devil feats of circus and acrobatics, it is absolutely impossible not to have a good time! You’ll be left wanting more.

The show was non stop for the full 80 minutes and concluded with a full and well deserved standing ovation from a delighted Adelaide crowd – all of whom left the Spiegeltent that night with spring in their step and a wiggle of the hips! The crowd were young, old and everything between, so if it’s a ‘Girl’s Night Out’ or ‘Date Night’ you’re planning, Velvet is the Fringe show for you!

Velvet is showing daily in the Spiegeltent in the Garden of Unearthly Delights – some dates are already Sold Out so jump online and book yourself some tickets sooner rather than later!

See our posts about all things Fringe here. Read our reviews of family shows here.

When:        Daily during the Adelaide Fringe