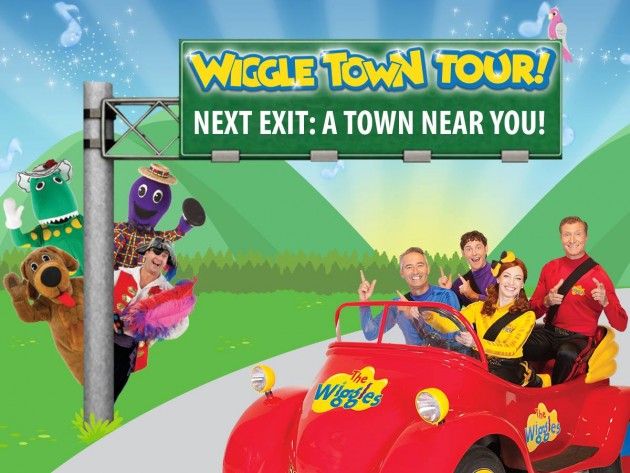 The Wiggles are celebrating their 25th birthday in the best way possible! Emma, Simon, Anthony and Lachy will be performing in over 100 locations around Australia! Wiggle Town is the name of a brand new tour as well as the new Wiggles CD, DVD, and TV series which debut on ABC TV soon.

The Wiggle Town Tour follows the runaway success of last year, where The Wiggles performed in every state and territory across Australia and sold out over 200 shows, performing to over a quarter of a million fans around the world, making The Wiggles the most successful children’s entertainment group.

The Wiggle Town Tour will be coming to South Australia in April/May 2016 and will feature songs from Wiggle Town. You’ll sing and dance along with the latest Wiggles hits such as ‘Do the Propeller’, ‘Emma’s Yellow Bow’ and ‘Simon Says’ as well as Wiggle classics ‘Hot Potato’, ‘Rock a Bye Your Bear’ and ‘Fruit Salad’. The Fab Four of fun will of course be joined by Dorothy the Dinosaur, Captain Feathersword, Wags the Dog and Henry the Octopus!

It’s fabulous when The Wiggles do the smaller community halls ands centres where you can be right up close to the action. I still remember the first Wiggles concert I attended many years ago at a concert hall in Golden Grove.

With so many sold out shows last year, you better get a wiggle on and get your tickets now as tickets to The Wiggle Town tour will sell like … Hot Potatoes!

For more information and all bookings please visit the The Wiggles website here.

What:  Wiggle Town Tour! | The Wiggles

Where: Various locations around South Australia

🏖️ We're so lucky in South Australia to be ab

{Pick Your Own Strawberries} *BEERENBERG* 🍓If y