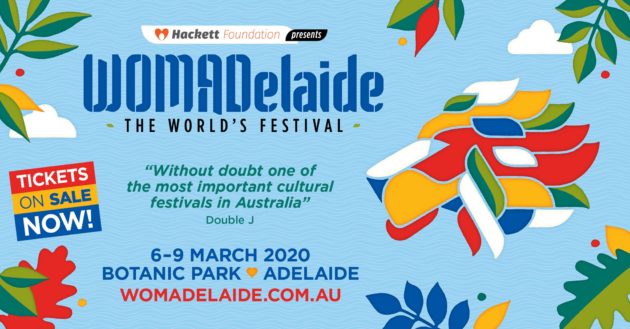 Over the March long weekend in Adelaide, WOMADelaide returns again to the green oasis of Adelaide’s stunning Botanic Park. WOMADelaide is one of Australia’s iconic festivals and is an award-winning celebration of the very best of the World of Music, Arts & Dance.

WOMADelaide has released the final 50 artists to complete its 2020 artistic program, bound for Adelaide’s Botanic Park from 6–9 March.

It has been announced that multi-platinum Australian artist Matt Corby will perform at the festival on the Foundation Stage on Monday 9 March in Botanic Park.

With two ARIA Song of the Year awards, a #1 debut album, APRA Awards and a career spanning a decade, Corby consistently pushes musical boundaries and has embraced a journey of self-discovery.

WOMADelaide Director Ian Scobie said that he was delighted that Matt Corby was available to headline the final night of the festival, after the unexpected withdrawal of Ziggy Marley.

Darling of modern folk, singer-songwriter Laura Marling from the UK will also be performing at WOMADelaide. Winner of the 2011 Brit Awards for Best British Female Solo Artist and Best New Artist at the 2011 NME awards, Marling has gone on to release seven studio albums.  Her maiden performance at WOMADelaide will be a stripped-back solo set. 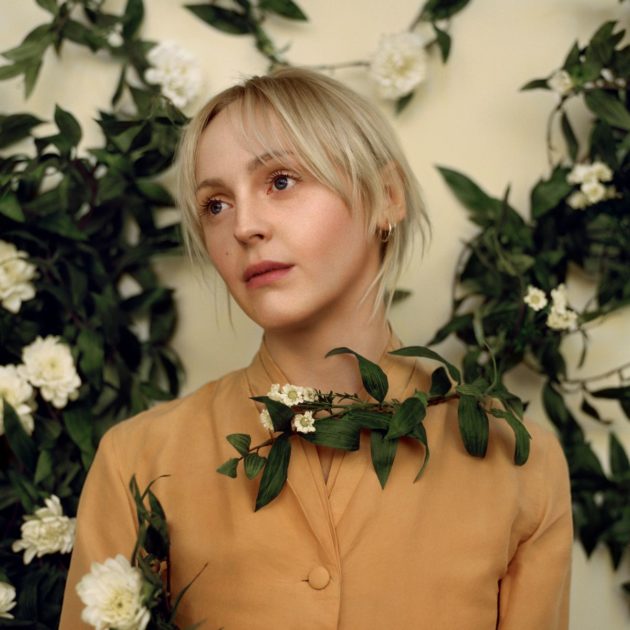 Also confirmed is ‘the King of Samba Rock’, Jorge Ben Jor. One of the biggest stars of Brazilian music, Jorge Ben Jor became a global sensation in 1963, with the release of his first album and the smash hit Mas Que Nada. His smooth and distinctive mix of samba with Bossa nova, funk, pop and rock placed him at the forefront of the ‘jovem guarda’ (young guard) and ‘tropicalia’ (tropical-psychedelia) movements.

“WOMADelaide plays host to an incredible program of traditional and contemporary music, arts and dance from around the world,” said WOMADelaide Director, Ian Scobie.  “Being able to bring together such diverse artforms – from spiritual and trance music to folk and funk music, contemporary dance and theatrical site performances and circus – in the space of only four days, in such a beautiful environment, is what keeps this festival so vibrant.  It is a one-of-a-kind event and our 21st edition is no exception.”

Leading the first announcement is living musical legend, civil rights icon, Rock and Roll Hall of Famer and Grammy Award-winner, Mavis Staples. Hailed by NPR as “one of America’s defining voices of freedom and peace,” Staples is the kind of once-in-a-generation artist whose impact on music and culture would be difficult to overstate.

‘The Golden Voice of Africa’, Salif Keita (Mali), returns too with a cracking eight-piece band as part of his farewell tour, celebrating 50 years of music and 70 years of life. From humble beginnings with the Rail Band of the Train Station Hotel in Bamako and a life of tribulations as an albino, Keita’s latest album Autre Blanc (Another White) calls on the world to celebrate difference.

Fresh from the release of their seventh studio album and a tour of Europe that included two shows at Glastonbury, The Cat Empire return to WOMADelaide for an unprecedented fifth appearance. Over 17 years, the band has come to be considered ‘family’, growing up with the festival since their first show at WoZone, the festival’s late night club, in 2003. In 2020 the adored headliners will close the main stage on 6 March.

Minister for Trade, Tourism and Investment, David Ridgway said the calibre of the artists announced reinforced Adelaide’s position as a UNESCO City of Music.

“We are bringing the best of the world’s most creative musicians, dancers and artists right into the heart of Adelaide, and it is going to be another amazing celebration for everyone to embrace.” 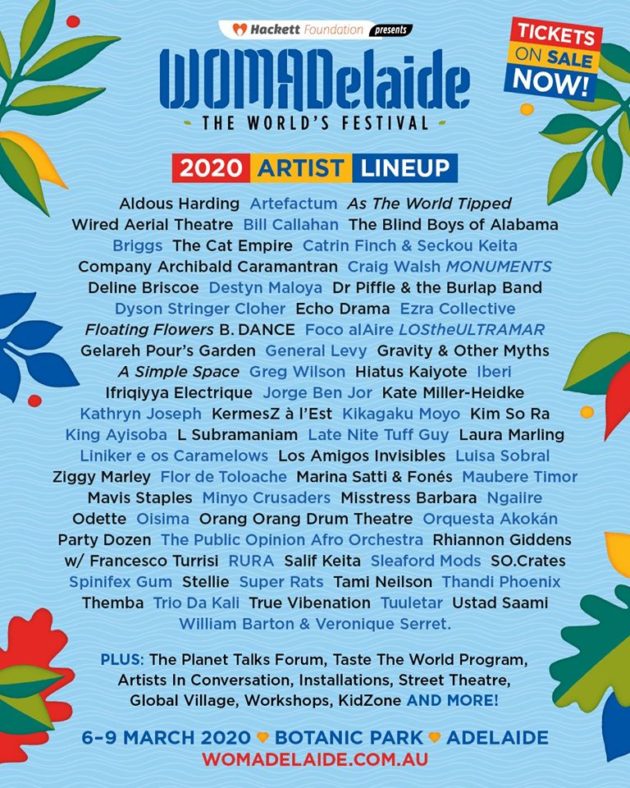 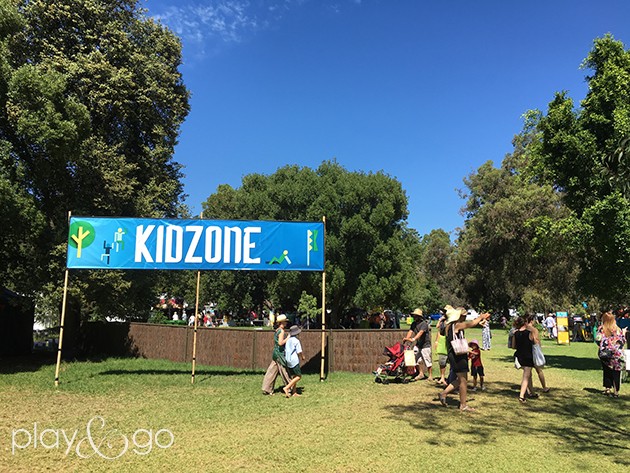 WOMADelaide is extremely family friendly. Many of you may have grown up with WOMADelaide, and they love seeing the next generations of tiny dancers appearing each year. Read on for information on how to maximise your family fun at WOMADelaide.

A world of fun awaits in the KidZone with daily activities programmed specially for kids. From arts/crafts sessions, storytelling, explorations of Kaurna culture and amazing museum discoveries, to nature-play and interactive entertainment, KidZone caters for kids 12 and under in a fun, family-friendly and safe environment. You are more than welcome to bring prams or strollers and baby changing facilities can be found in the KidZone as well as next to the Plane Tree Drive toilet block.

At the KidZone, children can sing, dance, play, tell stories, find out about stuff, have adventures – and just maybe be there when the world’s biggest-ever soap bubble happens.

Justine Clarke from PlaySchool has been announced as part of the festival program in 2020.

Uncle Stevie’s Kaurna Classroom (MONDAY ONLY)
A place where kids can have fun learning about Kaurna culture and language with Kaurna educators.

The Talking Trees
Talking Trees is a ground-breaking event which allows kids to have a face to trunk conversation.

Adelaide City Libraries Book Nook
An intimate book nook to read, listen to a reading session, make a badge, or draw in 3D.

Evelyn Roth’s Nylon Zoo
A giant inflatable Grey Headed Flying Fox, like of the ones that live in Botanic Park, holding 40 kids.

Free Fruit!
All kids will be treated to delicious FREE fruit at KidZone thanks to Adelaide Central Market.

For more about what WOMADelaide is like for families, check out our review of WOMADelaide 2019 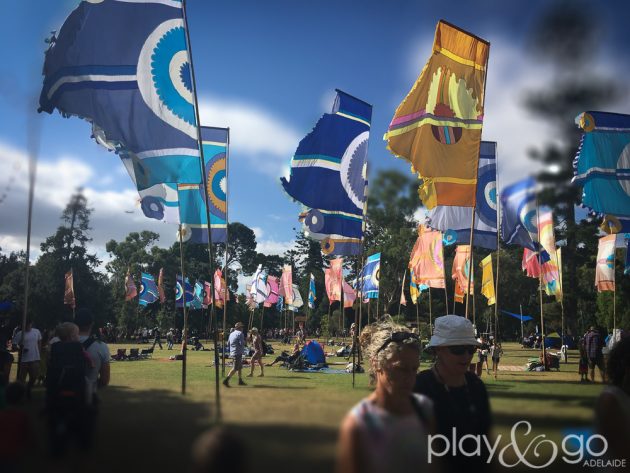 AS THE WORLD TIPPED – UK

The aerial spectacular As the World Tipped is a politically-charged and environmentally-focused performance for our times, by the renowned English company, Wired Aerial Theatre. To be presented nightly in Frome Park, and towering 13 metres above the audience, As the World Tipped is an exceptionally ambitious and beautifully crafted aerial performance where dance and theatrics entwine with extraordinary projections that illustrate the very real and immediate realities of climate change.

This street theatre company is dedicated to itinerant, dreamlike performances, where they invite audiences to interact with their delightful four-metre high articulated puppets. Le Caramantran is a collective of carnival artists – stilt walkers, musicians, comedians, puppeteers, constructors and sculptors – moved by the desire to surprise and unearth the poetry in everyday life. 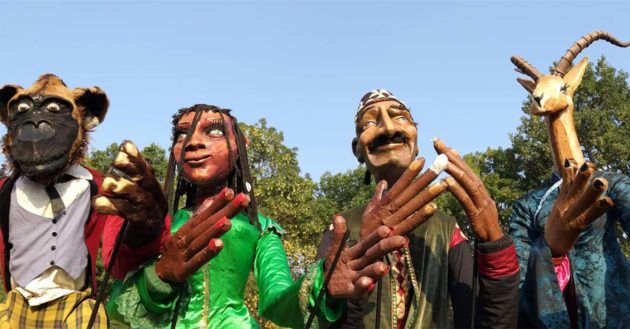 Over the last 30 years, Australian artist Craig Walsh has become widely known for his pioneering works including innovative approaches to projection mapping in unconventional sites. MONUMENTS represent a haunting synergy between the human form, natural environment and the act of viewing. Moving images transform trees into sculptural monuments surveying the immediate environment. The work aims to challenge traditional expectations of public monuments and the selective history represented in our civic spaces.

For MONUMENTS WOMADelaide, the installation will pay homage to individuals who have made a significant commitment to the environment.

LOStheULTRAMAR represent a kind of tribe, a product of the globalised world, sharing their slow-moving procession and dance with the public. Wearing dark suits, industrial aluminium lampshades as a mask, as a head-dress – reminders of tribal traditions from around the world – these beings appear out of nowhere. Mysteriously, wordlessly, and using minimal body movements, they have potent emotional impact. Directed by dancer, writer and sociologist Marcela Sánchez Mota and since 2007 choreographer Octavio Zeivy, Foco alAire Producciones was founded in Germany in 1999. Their work has always been characterised by the study of the role of the body in communication.

The seven acrobats in GOM push their physical limits without reserve in a performance that is raw, frantic and delicate. A Simple Space, which has been performed over 600 times in 30 countries, evokes a visceral response because there’s no fine-tuning through makeup, lighting and contrived theatrical overlay. On the grass and up close, this gritty show allows audiences to feel the heat and be immersed in every breathtaking moment.

The 180 coloured flags you see across Botanic Park are created by Angus Watt, an English visual artist who is fascinated by the interplay between light, colour and movement offered by simple fabrics. Angus has produced a unique range of flags for display at each WOMADelaide since 1999 and, for the past decade or so, has been working from his home studio in the mountains in Spain. 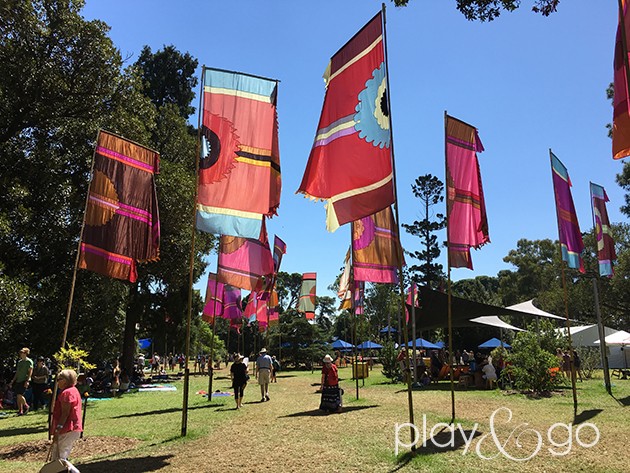 WOMADelaide has teamed up with UniSA’s MOD. to bring a taste of its futuristic museum of discovery to Frome Park.

Inside the ‘WOMOD.’ shipping container, audiences can immerse themselves in the multi-sensory exhibit Feeling Human. Using a range of technologies the installation will invite people to consider, and experience first-hand, how the body and mind work together to feel pain.

A collaboration between MOD. and Professor Lorimer Moseley and Dr Tasha Stanton from the University of South Australia, Feeling Human is a place where stories of pain are told, provoked, stimulated, simulated, and made three dimensional.

The exhibit uses different technologies to give you a series of experiences, each providing a ‘window’ into pain research. 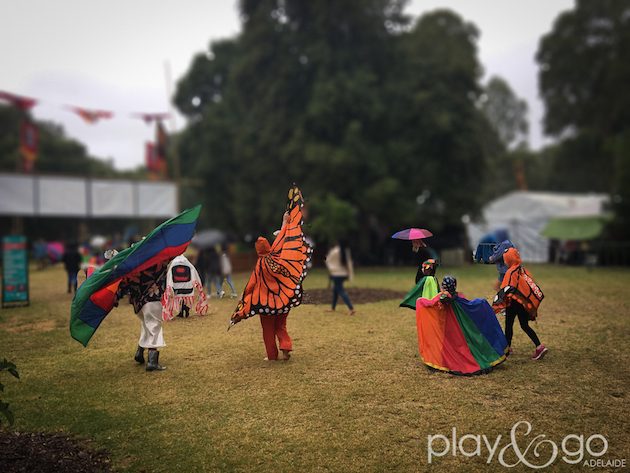 Children 12 and under are admitted free when accompanied by a paying adult to WOMADelaide. There is no limit on the number of children under 12 an adult can bring in and they do not need a ticket in advance.  A discounted Youth Pass price is offered to children aged between 13 – 17.

Tickets are available for single days, night only, two days or three and four day passes. Click the link below for prices.