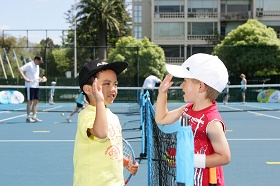 Got a future Serena or Roger in your house?

The popular World Tennis Challenge Kids Tennis Day is back in 2016, and this year it will take place at the Happy Valley Tennis Club. This is a FREE event that is open to 5-12 year olds.

Activities include ANZ Tennis Hot Shots courts, jumping castles, face painting, Speed Serve plus many others. On top of all the exciting activities for kids, there will be some world class tennis on display at the 2016 City of Onkaparinga ATP Challenger with the finals of singles and doubles being played starting at 11:30am.

The former world No.7, 2013 Wimbledon champion and 2011 French open runner up who was noted for her two handed forehand and backhand. Her win at Wimbledon made her only the sixth player in the open era to win the Championships without dropping a single set.

Current coach of Marin Cilic, the former world No.2 Goran Ivanisevic is one of the legends of the game. After his WTC debut in 2015, the 2001 Wimbledon champion – the only person to ever win off a wildcard entry – will return for 2016 much to the delight of those who witnessed his great personality and on court talent last year.

The hometown hero has had a sensational couple of years on the international touring circuit and became the 3rd teen to crack the Top 100 – he is currently ranked #71.

After turning professional in 1991 at just 14, Iva Majoli stunned a 16 year old Martina Hingis at the 1997 French Open to take the championship in straight sets. Majoli had a career high of world No.4 in 1996 at age 18.

The former world No.8, 1998 US Open and 2003 Wimbledon finalist is revered by the Australian public for his wins in the deciding rubbers that handed the Davis Cup to Australia in 1999 and 2003.

The former world No.1 is one of the greatest women players of all time. Winner of fourteen Grand Slam titles – comprising four singles, six doubles and four mixed doubles titles – she also holds the record for the most matches won in the Fed Cup and is the only tennis player to have played in five Olympics.

After picking up a racquet at just 4, Fernando Verdasco reached a career high of world No.7 in 2009 and has won 13 ATP titles. He was a member of Spain’s winning Davis cup team in 2008, ‘09 and ‘11 having won the deciding match for them his first two years. Verdasco is currently ranked No.43.

Mats is always a crowd favourite at the WTC. The former world No.1 holds a highly impressive eight Grand Slam titles (3 French, 1 US and 3 Australian and a doubles title at Wimbledon).

For more information and all enquiries please visit the World Tennis Challenge website.