Hot off the back of five star sell-out seasons in Melbourne and Edinburgh (where they also picked up the coveted Children’s Choice Award at the Edinburgh Fringe), Children Are Stinky is billed as high brow toilet humour for immature kids – as you might expect from the name of the show.

It was certainly all giggles amongst the Play & Go kids as we walked in to the Garden of Unearthly Delights to see the show.  Debate raged thick and fast as to which one of them was the most stinky. I think they anticipated that the show was going to be fun, and silly … and possibly also stinky. 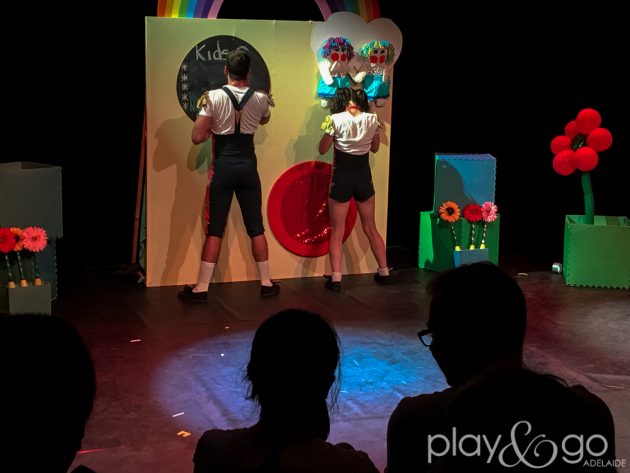 Yes I know children are stinky but what is Children Are Stinky about?

Children Are Stinky follows clowns Kylie and Jason (not their real names) trying to prove – or ultimately disprove – the theory that children are stinky. It’s the brainchild of Circus Trick Tease, and stars Malia Walsh and Chris Carlos.

It’s just under an hour of high-voltage fun, spectacular acrobatics, hilarity, fabulous hula hooping, slow motion comedy and daredevil stunts. Yes there are fart jokes and fart noises and yes your children may go home and try to stack chairs in your lounge room, but there’s a lot more to this show than farts.

Having seen a few children’s shows in my time I would say this falls into the category of kids’ shows that are fun for grown-ups too. Win win! 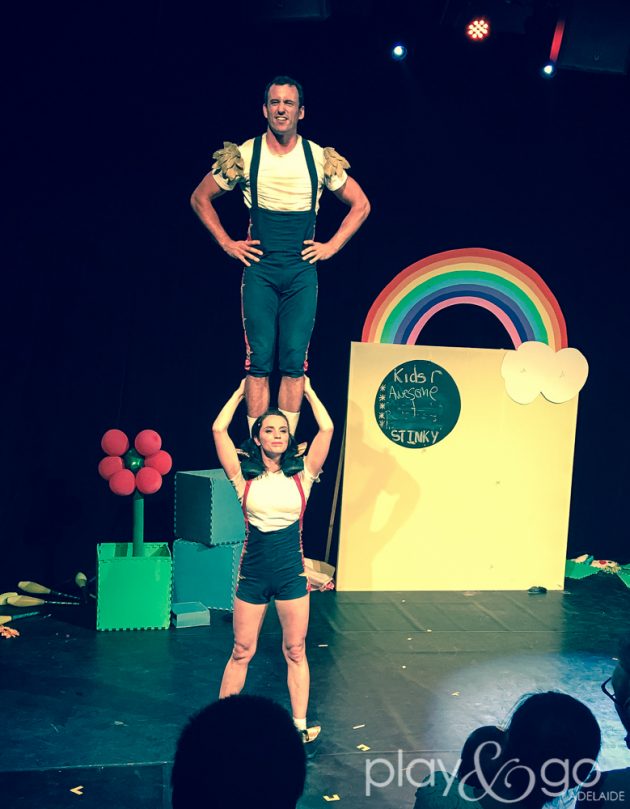 If you’re looking for a show to go to with your kids, and if you can handle a few fart jokes, then we think you’ll love this.

Children Are Stinky is a feel-good show which had grown-ups laughing and clapping along. The audience appreciated the duo’s onstage energy, great chemistry, and their cheeky sense of fun.

We also loved the dance moves and the soundtrack with nostalgic 90s musical moments like Run DMC’s It’s Like That, I Saw The Sun by Ace of Base, Nirvana’s Smells Like Teen Spirit, and the Spice’s Girls’ Wannabe. We enjoyed the moments of audience participation as well as the (slightly ironic?) nods to The Wiggles and Frozen. 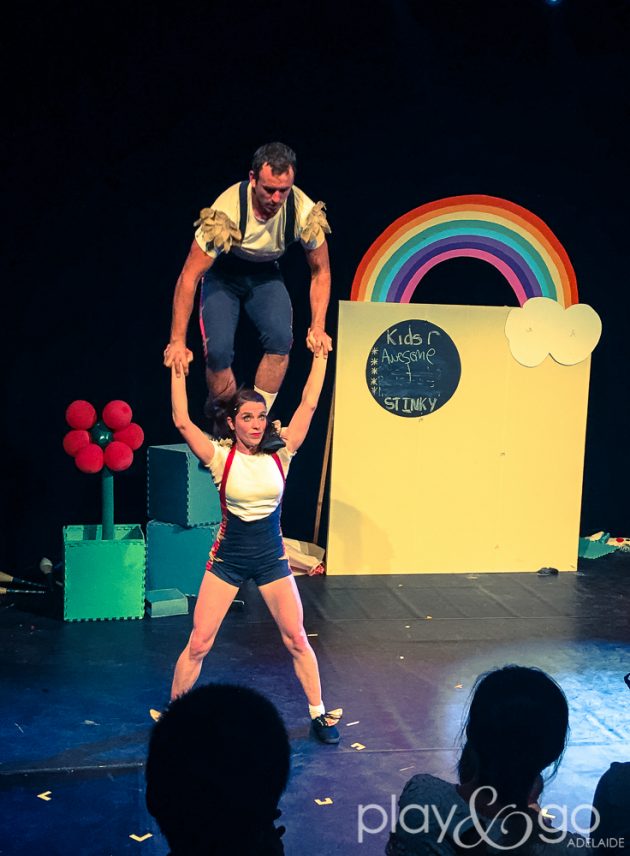 What the Play & Go kids thought

This show totally hit the mark with the 6 and 9 nine year old who thought the smashing of eggs and the farting were comic genius.

As well as rolling around laughing at some of the funnier clowning moments they were totally in awe of the incredible strength, balance and skill of the performers.

During one of the stunts where Jason attempted a one-hand handstand atop a teetering stack of balancing chairs, the 9 year old had to cover his eyes. There was plenty of clapping and dancing along to the music.

“It was funny and stinky”

“Anyone who likes to do armpit farts will like this show”

“If there was a sequel I’d go and see it” 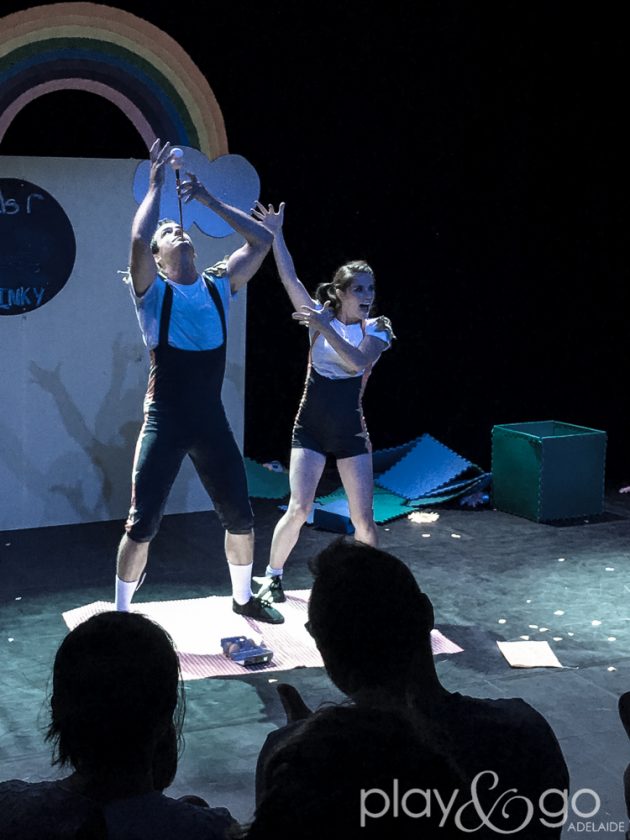 Tickets to Children Are Stinky

Children Are Stinky is on at the Garden of Unearthly Delights until 19 March. Go see it!

Get your tickets here 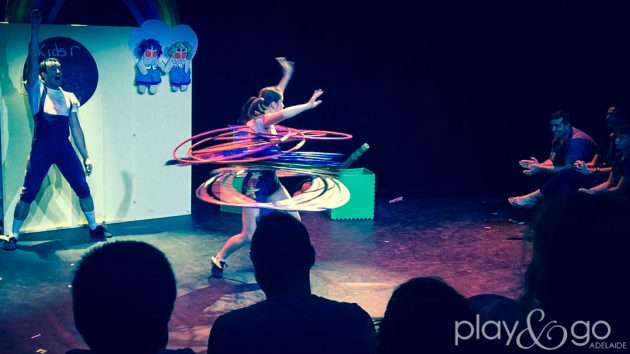 Tips for enjoying Children Are Stinky

❤️Get your tickets early and then wander through the Garden of Unearthly Delights soaking up the ambience. If we’d had more time we could have happily enjoyed some dinner or some activities at the Garden. See more about the Garden here.

❤️The music during the show is reasonably loud so if you have noise-sensitive kids you may want to bring earmuffs or earplugs for them. Having said this there was a baby in the front row who was cooing with delight throughout the show.

❤️It’s warm inside the Corona Tent so dress light.

❤️Be prepared for lots of fart jokes on the way home… 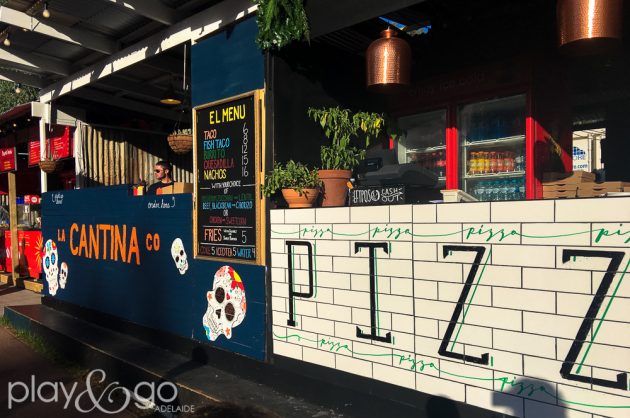 For more information about this show and ticket bookings, please see the Adelaide Fringe website here.

See our posts about all things Fringe here

About Susannah: I’m a mum to three boys and a little girl and I am learning to embrace the chaos. I love my morning coffee, exercise, cranking up some good tunes on the stereo, and heading away to new places on holiday. Originally from New Zealand, I now call Adelaide home and I love getting out and about and exploring all the fabulous things for families to do in Adelaide.

Where: Corona Theatre at The Garden of Unearthly Delights | Rundle Park | Adelaide

Play & Go Adelaide have media access to the Adelaide Fringe 2017. All reviews are our own opinion from personal experience, unpaid and not influenced by the artist/s and/or promoter/s in any way.

Want to get other Play & Go reviews, plus all the latest events and activities straight to your inbox?