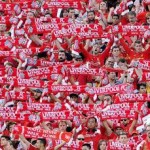 [ July 19, 2015 to July 20, 2015. ]
It’s Time to Paint the Town Red!
Rundle Mall is excited to announce they are painting the Mall RED in anticipation of the International Cup match against Liverpool FC and Adelaide United FC.

You can now book your tickets for the upcoming @il

Such a gorgeous shot of the evening sky over the A