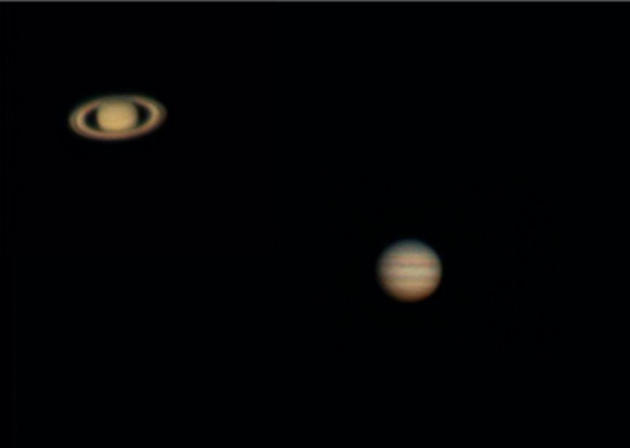 Jupiter and Saturn will be the closest they have been since 1623 this December.

Not seen in 800 years, Jupiter and Saturn will align so closely that they will appear to collide when viewed from earth. This is known as the “Christmas Star” or “Star of Bethlehem”. Alignments of planets are rare, however this conjunction is a must-see due to how close the plants will appear. Unlike other alignments of planets where it looks like they’re in a straight line, this will look like one super bright planet.

The Great Conjunction happens every 19-20 years, but this is the closest the planets have been since the Middle Ages. We won’t see another conjunction this close until March 2080 so this is a once-in-a-lifetime opportunity.

It takes Saturn nearly 30 years to complete one orbit and Jupiter takes nearly 12 years. Jupiter laps Saturn every 20 years. How far apart they are depends on the tilt of the planet’s orbit.

Note that the planets themselves aren’t actually getting close, this is just what it looks like from Earth.

When to view the conjunction:

During December, Jupiter and Saturn will get noticeably closer each night in the evening twilight. It might be worth seeing them in the first couple of weeks of December before they get too low so people in urban areas can see them.

On Thursday 17 December, the planets will also be on show with a beautiful crescent moon. This will look amazing to both the naked eye as well as binoculars and telescopes.

The moment when the two planets will be their closest is on the morning of Tuesday 22 December in Australia, but by that point they won’t be visible. The best time would be around 8:30pm Adelaide time (or about half an hour after sunset) on Monday 21 December. But they will set over the horizon within an hour. 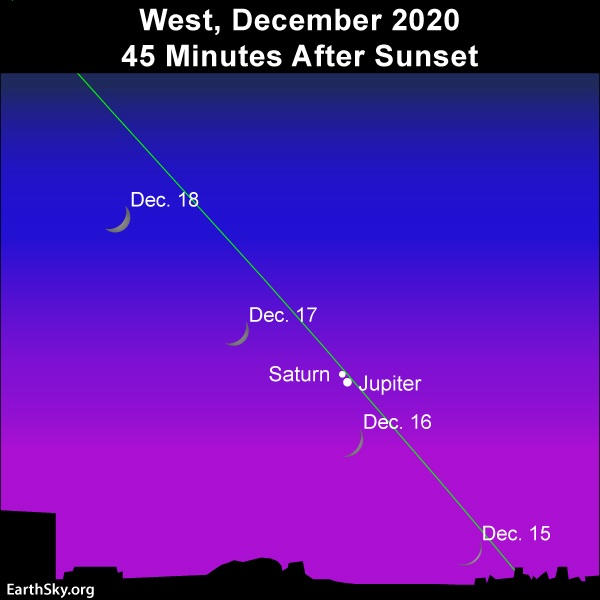 How to view the conjunction:

The planets will be visible on the western horizon at about 17 degrees.

If there is clear weather, you will be able to see the planets even in city areas with light pollution.

Look for two bright dots on the western horizon. On 21 December, they might be so close you can’t see the gap between them so look for one bright dot.

December is also the month where we will be able to see the annual Geminids meteor shower.

The Geminid meteor shower is named because it appears to come from a point in the Gemini constellation. The Geminids can be viewed from 4 – 17 December but the peak event will be on Monday 14 December.

The peak time will be the night of 13 and 14 December where there will be more meteors than usual. This year, they will be occurring before the New Moon so the moon won’t be washing out the faint meteors.

There will be less meteors on 13 December, but if you stay up you can see the crescent moon and Venus near each other on the eastern horizon about half an hour before sunrise.

Look for the Geminids in the North about 20 degrees from the horizon.

It is recommended that no equipment be used for looking at meteor showers. It is better to not look at the point they look like they’re coming from but outside of this where they have “tails” already.

It is best to find a place where you can view the horizon unobscured as the meteors will be quite low in the sky.

For more information and all enquiries please visit the

When:    During December 2020 | See above for best times to spot these events

Can you guess which is her favourite? It’s a wo