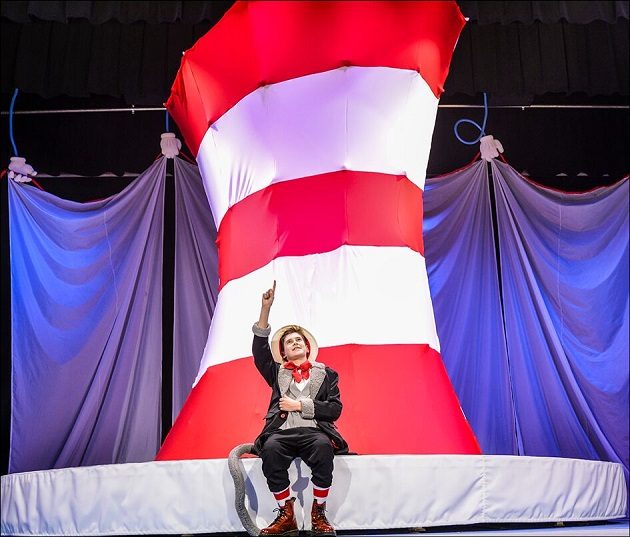 Oh, the thinks you can think! Think of a sensation of colour, a sea of young talent and theatre magic brought to life. That is how Pelican Production’s Seussical Jr, under the very creative direction of David Lampard, wowed audiences in their opening show tonight. As you know, the words of Dr Seuss are tongue-twisting rhymes and not easy to read out loud at the best of times, so I think you get bonus points for being able to sing them on stage without getting your tongue in a twist. The young cast managed the task brilliantly and it was a joy to watch and hear. So much detail has gone into the playful costumes, given a modern and hip twist, with cute pom poms and buttons adorning the stage, with not your traditional animal costumes on show. 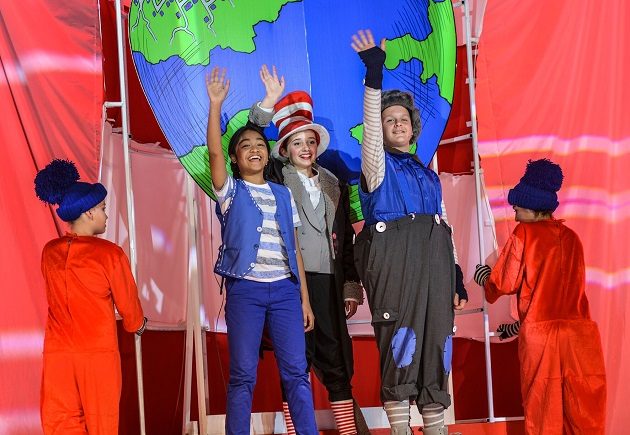 The story follows the adventures of the kind hearted Horton the Elephant, who discovers tiny people, ‘Whos’, who live in a speck of dust, and is determined to protect them even when no-one else believes him. His kindness and responsible nature leaves him stuck on a nest, minding an egg for Mayzie La Bird and he faces danger, being sold to a circus and the worry of not being able to ever find his little friend Jojo and the tiny people of Whoville. The audience is transported from the tiny town of Whoville, the Jungle of Nool to the Circus McGurkus with a huge red and white revolving stripe hat as a clever set design. There are themes of friendship, and being loyal to your beliefs, even in the face of ridicule, and children may also understand the idea that, like Gertrude the bird,  you don’t need to go to the trouble of changing yourself and getting a big long tail in order for someone to notice you.

There are two casts for the show. The ‘Green Eggs’cast saw brilliant performances by all the characters tonight. It’s a great team effort as the show doesn’t just rely on Horton, the Cat in the Hat and Jojo. There are many with a substantial part including Gertrude McFuzz (the bird with the small feather tail), the cheeky monkeys, Sour Kangaroos, Mayzie La Bird, Mr Mayor and Mrs Mayor (with the amazing tall hair) of Whoville, and the three pink Bird Girls. The large ensemble really bring the musical numbers to life with strong vocals and choreography. It’s a true test of professionalism too when you manage to deal easily with a misbehaving prop, in this case a very long bird tail that just didn’t want to stick tonight. It’s easy to forget just how young some of these performers are as they own the stage.

The seamless changes to the scenes; the use of pretty lights, playful pom poms and glow in the dark features are brilliant creative touches, while the music and sound was spot on tonight. Director, Co-Choreographer and set designer David Lampard, Assistant Director and Co-Choreographer Bec Schembri and Musical Director Martin Cheney have created an imaginative Seussical world of wonder.  If you thinks you can, then you must go and see this show – it’s a musical theatre treat, and another triumph for Pelican Productions Directors, Jen Frith and Kylie Green.

Photos above by Jen Frith of Pelican Productions, supplied

INFO ABOUT THE SHOW:

Join all your favourite Dr Seuss characters in musical magic!

Enter the magical world of Dr Seuss in this fantastical musical extravaganza from Tony-winners, Lynn Ahrens and Stephen Flaherty.

Narrated by The Cat in the Hat, follow the story of Horton the Elephant who discovers a speck of dust containing tiny people the ‘Whos’ whom he must protect facing ridicule from a number of naysayers and various dangers along the way.

From the Jungles of Nool to Whoville this musical is full of an array of larger than life and colourful characters that keep both young and old entertained from beginning to end. Ultimately a story of the triumph of friendship, loyalty, family and community, Seussical The Musical Jr will leave your imagination buzzing as only Seuss can.

Don’t miss Seussical The Musical Jr as it hits the Adelaide stage from 15 to 17 September, playing at the Norwood Concert Hall.

For more information and all enquiries please visit the Pelican Productions website.

What: Seussical The Musical Jr