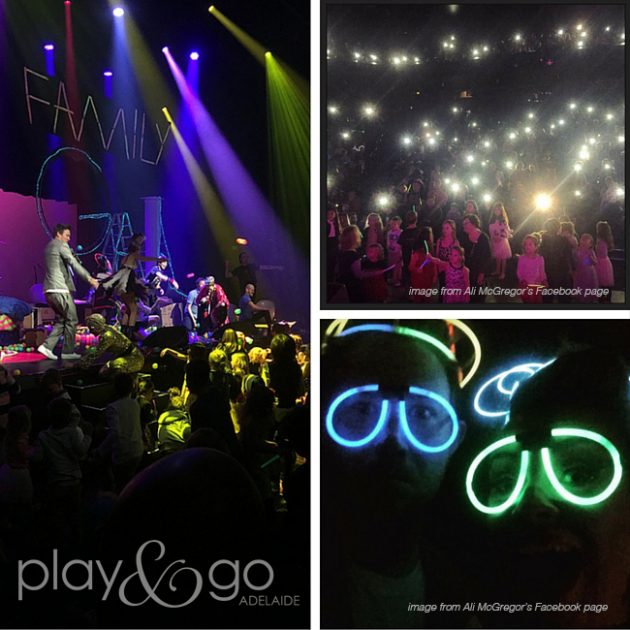 The Family Gala is new to Adelaide in 2016 and I’d say if the audience reaction was anything to go by it’ll be a regular part of the Something On Saturday season.

If you were lucky enough to get tickets to the Family Gala (it was a sell-out) then you would have been treated to the red carpet treatment and a taste of the amazing talent on show at this year’s Adelaide Cabaret Festival.

The Something on Saturday program has teamed up with the Adelaide Cabaret Festival to present this gala and we give it a ten out of ten for family-friendly fun, high-energy musical performances, and a sense of occasion.

The child-friendly version of the Adelaide Cabaret Festival Gala Night

I love the Adelaide Cabaret Festival and have previously enjoyed the Cabaret Festival Gala Night – it’s a great excuse to get dressed up and have a night out and to see a sample of some of the amazing cabaret acts that we are lucky enough to see here in Adelaide.

The Something On Saturday Family Gala is the child-friendly version of the Adelaide Cabaret Festival Gala Night with just the right balance of glamour, noise, fun, and of course musical talent.

Getting your glamour on for the Family Gala

Children were encouraged to dress up for the Family Gala and plenty of families had made the effort to get their glamour on for the occasion. We spied several Oscar-ready outfits (note to self: must polish my tiara for next year’s Family Gala) and little girls floating about in heels and tutus and boys gallivanting about dressed as Jedis or their favourite hero.

Enjoying the red carpet treatment at the Family Gala

At the entrance to the Dunstan Playhouse Family Gala guests were given the red carpet treatment with a real-life red carpet, pretend flash bulbs and paparazzi. Ok maybe just paparazzo.

The gorgeous Ali Clarke (ABC 891 Mornings presenter) was there at the start of the carpet, oozing Hollywood glamour and resplendent in a red gown, and she met and greeted guests big and small and walked down the red carpet with them.

Something On Saturday Family Gala Highlights

Where to start? Wow! This was an hour of glowsticks and high-energy performances hosted by Eddie Perfect (of Playschool and Channel Ten’s Offspring fame) and Ali McGregor (also performing in Jazzamatazz later in the Something On Saturday program) who are the Adelaide Cabaret Festival artistic directors.

First up was Die Roten Punke: a comedy duo who describe themselves as Berlin’s Prince and Princess of Europop. Otto and Astrid entertained us with their song “Ich Bin Nicht Ein Roboter (I Am a Lion)”, accompanied by cowbell and keytar.

Children were invited to come down to the front of the theatre and join in with the dance party, and Die Roten Punke’s song which translates to “I am not a robot – I am a lion” got everybody robot dancing and joining in with lion noises at appropriate points in the song. There were some very enthusiastic lions in the audience and I also spotted one or two dads who were really getting into their robot dancing. Nice work dads!

My nine year old fellow gala goer was intrigued by their costumes and heavy make up, and was totally wowed by Otto’s breakdancing moves.

I loved Bjork back in the day and now that I think about it “It’s Oh So Quiet” was a great song choice for the Family Gala with its mix of soft and slow and loud and fast.

Ali had the children in the front lie down quietly on the floor while she sang the quieter part of the song and then as she burst into the chorus the children were encouraged to jump up and dance around. Actually some of the children needed no encouragement. I suspect it won’t be their last time in a moshpit.

Next up was a musical game show run by Miss Behave and her able assistant Harriet.

Adults were encouraged to get out their cellphones and turn them on to torch mode which looked great when the lights were dimmed.

Miss Behave and Harriet split the audience into two teams based on whether they were to the left or the right of the theatre. Points were won by the audience answering musical questions (such as identifying songs from a fragment of the song being played) and yelling out their answers.

Amy G (all the way from New York) arrived on the stage in roller skates and a feather tutu. She had little ones on the edge of their seats, and racing up to the stage to take a better look, as she careered with her spindly and wobbly legs from one side of the stage to the other trying desperately to retrieve her hat. It was superb physical comedy and very silly.

Spoiler: it turns out Amy can actually skate and is actually pretty fabulous at it, and can play the ukulele at the same time as she does so.

Eddie Perfect sings about wees in the bath

You know you’re at a kids’ musical event when there are songs about wees in the bath. Given the audience I’m sure it was a subject matter that resonated with most people.

Eddie’s vocals and skills on the piano elevated what is a bit of a banal topic of conversation to a whole new level. It was something of a smash hit with the Family Gala moshpit who were rocking out. I was reminded of dancing to my dad’s Billy Joel records as a child. Actually if I’m honest I might have been dancing in my seat a bit too.

I’m sure my kids will add Eddie’s Wee In The Bath to their bath-time repertoire. Thanks Eddie…

For me the musical highlight of the show was Tripod. They had less going on visually than the other acts in the Family Gala but they managed to bring their three-part harmony cowboy story to life with their amazing voices and their clever lyrics. There was laughter galore from the adults in the audience.

I will be picking up a copy of the Adelaide Cabaret Festival programme as I’d love to see Tripod and their harmonious and warm vocals again.

I don’t know if John Farnham was in the audience, but I reckon if he were he would have enjoyed Eddie Perfect and Tripod’s a capella version of ‘The Australian National Anthem’.

My seven year old fellow Family Gala goer was quick to point out that it wasn’t the actual national anthem. (It was the “You’re The Voice” with lots of “Johnny Farnhams” thrown in for good measure). While the kids in the moshpit weren’t dancing as much to this one, the grown-ups in the audience were getting into it.

Ali McGregor finished the Family Gala with the song “Who Let the Dogs Out”. The show ended with some all-out silliness, with plastic (ball-pit style) balls being thrown from the back of the stage to the children up the front who then fired them back at the stage, into the audience, and at each other.

We conga lined our way out of the theatre with the rest of the audience and into the bright daylight, and into a considerably more quiet, sedate and less silly Adelaide; and reflected on what a great show it had been.

I would highly recommend the Family Gala to everybody – little kids and big kids alike. It has whet my appetite to see more acts at the Adelaide Cabaret Festival, and I will be getting in early to buy my tickets for the Family Gala next year. 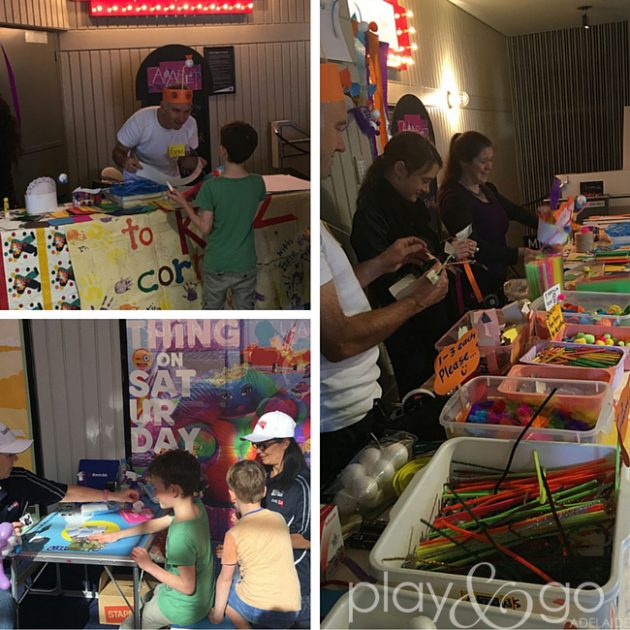 Making silly headbands at the Something On Saturday Kids’ Corner Workshop

Most of the Something On Saturday performances have a free workshop beforehand where children can get stuck into some craft related to the event. The Family Gala was no exception and there were children of all ages (as well as quite a few adults) having a ball making some marvellous headbands. If you forget your tiara or crown; or needed to whip up the perfect headwear to go with your Oscar-ready outfit for the gala you were in luck.

The lovely Irene and Evan and friends behind the desk were full of encouragement and happy to lend a helping hand, and my fellow Gala goers agreed that it was a great preamble to the actual Family Gala. 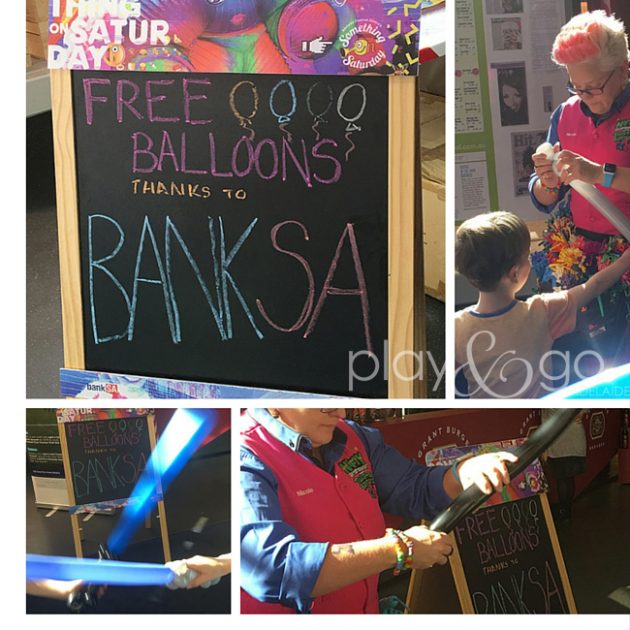 Children were greeted by friendly BankSA staff who helped them with free colouring in activities, tattoos (of the temporary kind) and then just to top things off, a balloon blower who was kept busy whipping up all kinds of creations from buzzy bee corsages to light sabres.

Tips for the Family Gala

For more information and ticket bookings for other shows please visit the Adelaide Festival Centre.

Find out more about other Something on Saturday 2016 shows here.

About Susannah: I’m a mum to three boys and a little girl and I am learning to embrace the chaos. I love my morning coffee, exercise, cranking up some good tunes on the stereo, and heading away to new places on holiday. Originally from New Zealand, I now call Adelaide home and I love getting out and about and exploring all the fabulous things for families to do in Adelaide.

Who: Suitable for all ages

A cold treat for Star Wars fans we found recently.