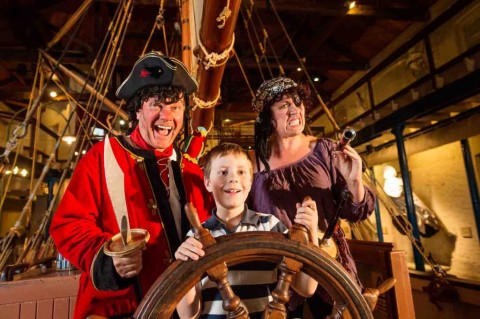 The Pirate Show is a rollicking interactive adventure.  Be ready to set sail with the pirate captain, mad mate and a lovely lighthouse keeper as they scramble for treasure.  Join Captain Black Diamond and his First Mate on-board a life-size replica ship at the SA Maritime Museum.  They have run out of money and need to sail for Treasure Island to get some more, so they’ll be needing a crew, which could be you.

The shows are filled with magic, cannon-ball juggling and music, and pirate songs aplenty to sing along with.  Children learn sailing and pirating skills, including the pirate’s alphabet.  It’s a swashbuckling tale with more twists and turns than a monkey’s tail. Come dressed and ready to join in the fun.

Join the pirates at the South Australian Maritime Museum for pirate mayhem and skulduggery, if you dare!

See the SA Maritime Museum website here for more information. The show is Free with general admission fees to the Museum (Adults $10, Concession $8, Child $5, Family $25 (2 Adults & up to 5 children)

If you are there between 6 to 10 January or 13 to 17 January 2014 you can also check out the One & All tall ship which is open for exploring between 10am to 3pm on those days. Read more about it here.