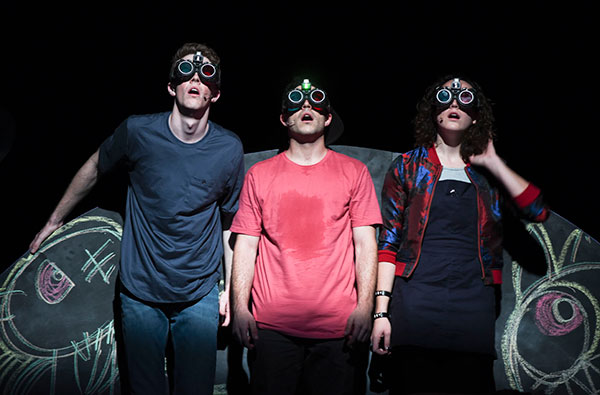 Fans of the zany, silly, fun Andy Griffiths and Terry Denton Treehouse book series have been waiting with anticipation to see their favourite characters, Andy and Terry come to life on the stage in the 78 Storey Treehouse and this is a fantastic production from CDP Theatre Producers.

Fans who have read the 78 Storey Treehouse (myself included) will have no trouble relating scenes from the book to the stage. All the main characters make an appearance including our tree-building heroes Andy and Terry, Mr Big Shot who is fabulously loud and annoying, and Jill, who is the sensible, intelligent voice of reason in the storey who rescues mice from their burning houses in space.

The highlight scene was definitely the intergalactic space fight where Andy and Terry exit the stage and reappear dressed in bright neon, glow-in-the-dark costumes complete with swords, having a slow motion Star Wars type battle in space. There were ‘oohs’ and ‘aahs’ from kids in the audience who thought this was pretty cool. In true Andy and Terry style, Andy throws Terry into a black hole where he is turned into spaghetti and then put through their combining machine to re-emerge as Terry with the addition of a tail.

The Andy Land scene was also a standout as we saw the actors take on more of the slightly naive, slightly crazy and silly attributes of the characters that we love from the book.  After all, the books are complete nonsense, full of imagination, silliness and a little bit of naughtiness and it was great to see the essence of the book captured in parts of the show. In this scene Andy goes to Andy Land to find solace and understanding in the people that know him best – clones of himself. When Andy arrives at the gates of Andy Land he meets his Andy clone who mirrors him in every way including the inability to add up numbers correctly.

CDP Theatre Producers have put together an impressive movable set to capture the imagination of kids who have dreamt of the out-of-this-world type of places featured in the book including Andy Land, complete with bright gates covered in flashing lights, the painted Treehouse backdrop and an illuminated space backdrop.

With great singing, acting, great choreography and impressive sets the 78 Storey Treehouse will definitely be a winner for fans of the book.

Editor’s Note: all shows are now sold out.

For information about other Something on Saturday 2018 shows click here.

Who: Suitable for ages