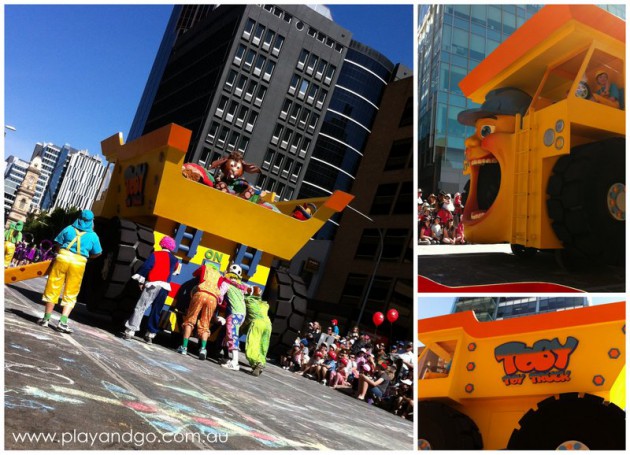 Rundle Mall and the Credit Union Christmas Pageant, two icons of Adelaide, have teamed up this year to bring the event even closer to the public commencing with the official launch activity taking place under the new Gawler Place canopy at 10.45am on 1st October 2014.

For the first time, the launch will be held in public in Rundle Mall thus affording city workers, residents and visitors the opportunity to celebrate the event as well as having their photo taken with one of the pageant’s favourite floats, Toby Toy Truck and two brand new floats to be unveiled that day.

Rundle Mall Management Authority CEO Ian Darbyshire said traders in the Rundle Mall precinct were looking forward to spreading Pageant magic in the heart of the our city and providing additional pageant experiences for the public this year.

“We are looking forward to working with the Credit Union Christmas Pageant over the coming months and making the event launch the first formal activity to take place under the newly refurbished Gawler Place Canopy” said Mt Darbyshire.

Following the launch formalities. Rundle Mall Management will host school holiday activities at the Gawler Place canopy from 11.30am – 2.30pm including the float display, entertainment by a pageant band and performers plus colouring activities and storytelling to be held in the City Library.

Hitaf Rasheed, General Manager, Events South Australia said of the new partnership “The Credit Union Christmas Pageant is looking forward to further developing this sponsorship and working relationship with Rundle Mall, to extend the life of the Pageant beyond just the event itself to create a greater Christmas atmosphere in the shopping district.”

“The traditional event launch where new floats are unveiled will now be held in Rundle Mall as part of the partnership, making it accessible to the wider public for the first time” she said.

For more information and all enquiries please visit the Rundle Mall website.

Where:  Under the Gawler Place Canopy, Rundle Mall