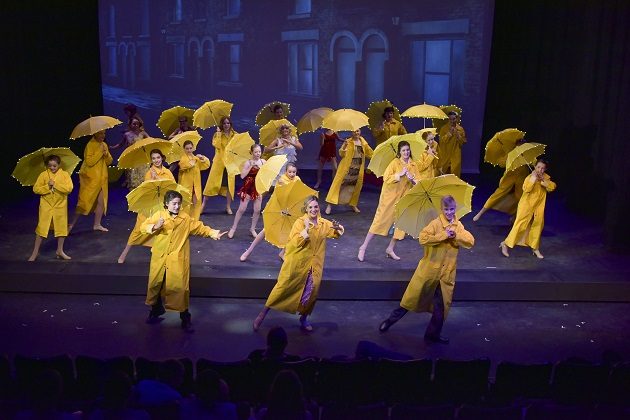 It’s hard to believe that a cast of 10 to 18 year olds have managed to produce a musical production so slick! They certainly have done this under the direction of Theatre Bugs’ Michelle Davy.

Singin in the Rain Jr was an all-singing, dancing, tapping musical with bright costumes befitting of the original on-screen musical with simple but effective backdrop screens and a few well-utilised props. The production even featured rain onstage!

The story of Singin in the Rain Jr followed the original film version – the conversion of silent films to “talkie” films. The four main characters were all extremely well-played by older members of the cast who even managed to maintain American accents for the entire production, rarely missed a beat and sang extremely well.

Although some of the witty lines seemed a little lost on the audience, the actress who played Lina Lamont did a great job keeping her shrill, annoying character voice going strong and managed to get the most laughs with her outrageous characterisation!

We loved the big finale which featured the whole chorus singing “Singin in the Rain” – along with yellow umbrellas lit with fairy lights, it was a spectacular sight.

The talent, hard work and energy of these young performers was both impressive and inspiring – it made us want to do a bit of singin’ in the rain ourselves!

For more information about this show and ticket bookings, please see the Adelaide Fringe website here.

What: Singin in the Rain JR | Theatre Bugs

Play & Go Adelaide have media access to the Adelaide Fringe 2017. All reviews are our own opinion from personal experience, unpaid and not influenced by the artist/s and/or promoter/s in any way.