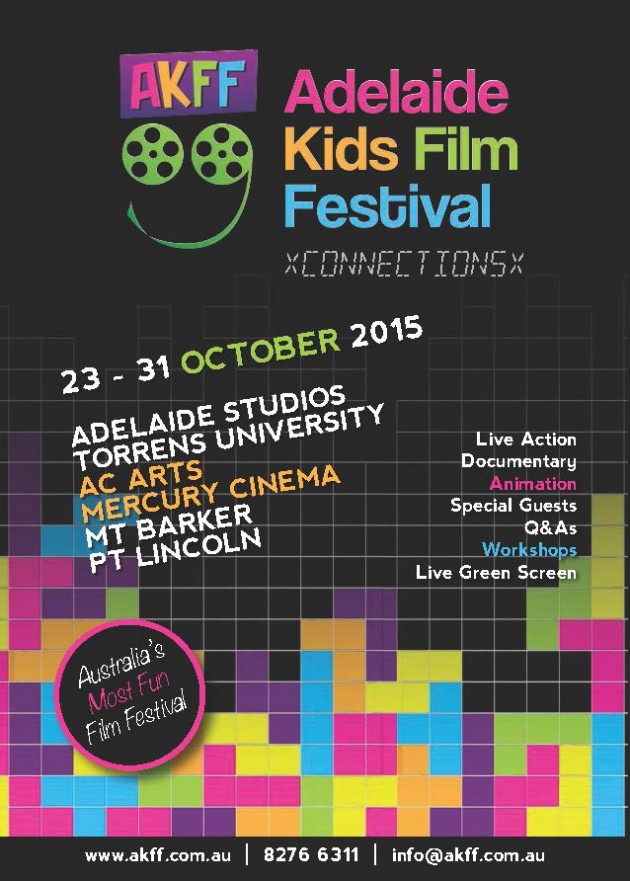 The Adelaide Kids Film Festival is an annual film festival ‘for kids by kids’.

The event is primarily aimed at filmmakers 18 years and under, with submissions of films under 10 minutes accepted in three main categories: Live-Action, Animation and Documentary. It is the organisers aim to ensure that the festival is as accessible to as many entrants as possible. As a result, submissions are free.  There is a minimal charge for screenings and special events  for attendees and filmmakers under the age of 18.

Predominantly existing to screen film submissions from children, the festival also recognises the need to support mentorship and guidance along side a showcasing platform. The Festival will be a feast of screenings, workshops and Q&A’s with special invited guests.

Submissions were also open to adult filmmakers who have made a film which is aimed at a youth audience.

The AKFF screens across selected cinemas including Palace Nova East End Cinemas, Adelaide Studios, Adelaide College of the Arts, Hindmarsh Square, Youthoria Cinema, Chaffey Theatre, Sir Robert Helpmann Theatre, Middleback Theatre. Some films from the AKFF program have been selected to screen internationally in the US, Spain and the UK.

This years festival has an awesome line up of short films from around the world, from Croatia to Australia filmmakers have been hard at work creating some of the best shorts to date. Included in this years line up are award winning features such as ‘Bill’ from the creators of Horrible Histories and academy nominated short ‘Me and My Moulton’ by Torill Kove.

You can check out the other special screenings here.

🌿 The Spring school holidays are nearly here an

Anyone for horizontal bungee? 😂 Love that laugh