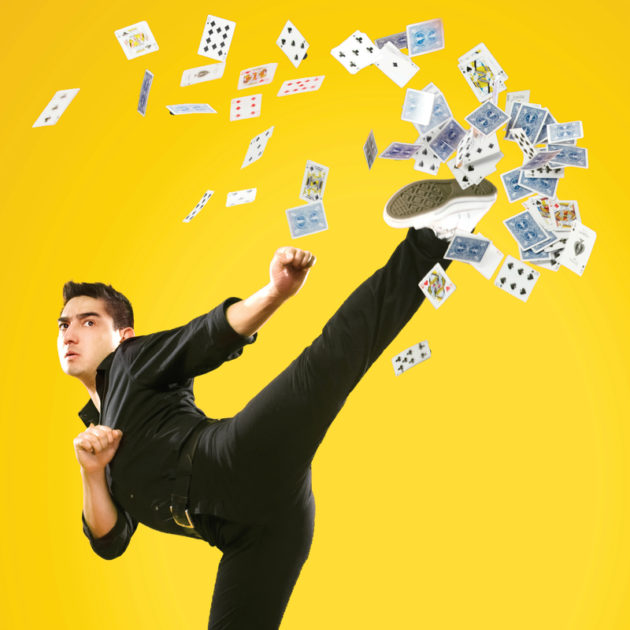 Card Ninja – extreme fun for all

New Zealander Javier Jarquin is the funniest and most charming ninja around. Armed with just playing cards he shows just how his extreme card manipulation abilities make him a deadly, but highly entertaining assassin on the stage.

He is not a magician as he carefully points out to us in a running gag. Ninja card stunts are challenges and he takes us on his journey of trials he conquered to become the expert that he is.

What makes the show so enjoyable is that Javier is a really likeable guy – he’s one of those clever natural comedians who involves a number of people in the audience, remembers their names and playfully weaves them into the show effortlessly.

It may not be a magic show but with spectacular energy, plenty of laughter and the most impressive Ninja card challenges nailed, it’s a pretty magical night out. This is the most fun you’ll ever have with a deck of cards.

Card Ninja is one of those unassuming shows that you go to, not really knowing what it’s about, but is a total gem that deserves to be seen. We’re so glad we took the chance to go and see it. It’s something just a little bit different (but in a really good way) and is what Fringe is all about.

It’s totally family friendly, extremely fun… and even a little bit dangerous (wait ’til you see what he does with those cards)! Suits families with slightly older children, teens and adults – they will all enjoy it. I took my 10 year old son and we both thoroughly loved it, as did everyone else in the audience. I spotted Fringe Director/CEO Heather Croall in the audience tonight too enjoying the show.

Age Recommendation: This show is suited for children around 7 years old and over. Toddlers and younger children won’t understand the jokes and ”Ninja talk”. It’s especially great if your kids are into martial arts.