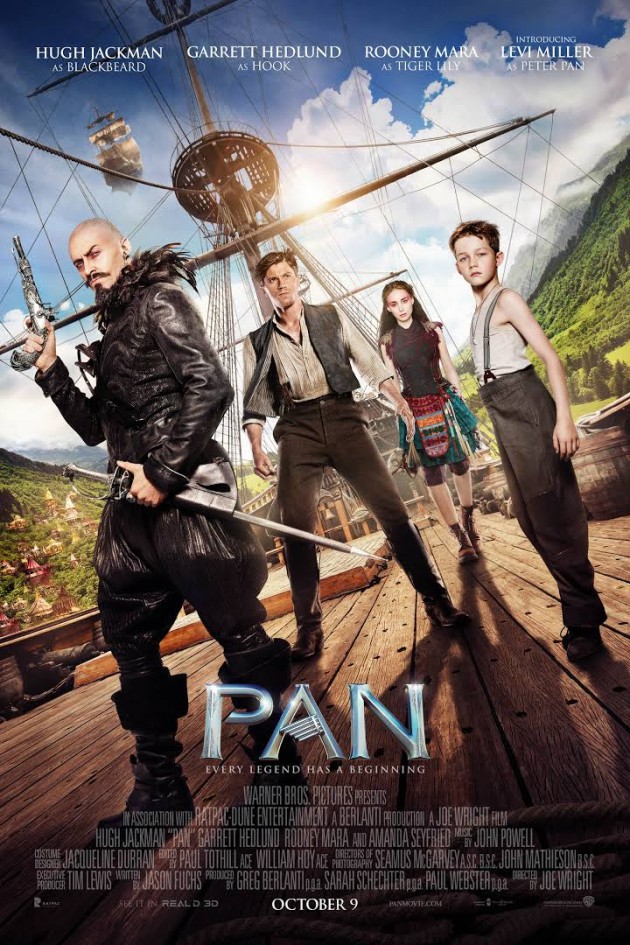 “To truly understand how things end, you must first know how they begin”

With Hollywood’s obsession of providing ‘prequels’ to our favourite stories, it was only a matter of time before the beloved ‘Peter Pan’ got reworked with a back story. ‘Pan’ fills us in with how Peter became ‘the boy who could fly’ and tells us what he was doing in Neverland in the first place. The film is a dark, loud, sword-swinging ugly-pirate film. If you’re looking to take your kids to feel good about fairies, magical lands and comedic pirates who get their comeuppance then this is not the film for you!

In a bleak WWII London orphanage where sleeping boys are routinely stolen from their beds by ghoulish pirates, a 12year-old Peter, played by a sweet-faced Levi Miller, is stolen and whisked away to work the mines of Neverland. Under the ruthless rule of Blackbeard (Hugh Jackman) the stolen children slave away in search of fairy dust to provide him with eternal youth.

In an obvious fairytale turn Peter discovers he is the prophesied child of a fairy-prince and human warrioress.

Peter befriends the awkwardly good-looking, cowboy-esque James Hook (Garrett Hedlund) and together with the comic-relieving Sam Smeigel (Adeel Akhtar) they flee the mines, befriend the natives, find the fairy kingdom and save Neverland from Blackbeard. Don’t look for any more plot substance – it’s not there.

The film is filled in with epic battle scenes, a splattering of witty dialogue and powerful special effects, which I imagine would be even more striking were you to watch it in 3D. The violence is plentiful, although luckily Netherland Natives disintegrate into poofs of colourful smoke when killed which saves the young audience from a lot of bloodshed.

Hugh Jackman is brilliant as Blackbeard and, despite the questionable artistic merit of ‘Pan’, his performance holds it all together and satisfies the critic in all of us. Rooney Mara should also come in with an honourable mention playing Tiger Lily, the princess warrior. She’s tough, beautiful and doesn’t suffer fools balancing out the testosterone-heavy screen. 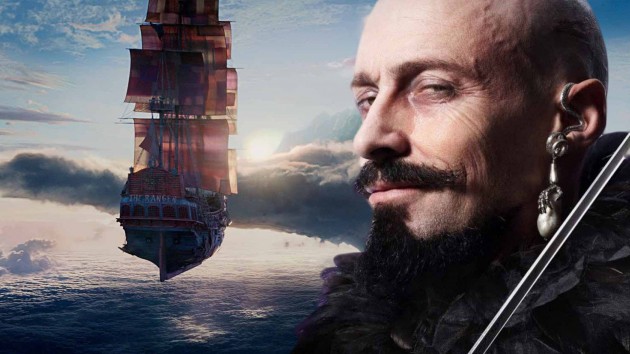 The film leaves us with Peter and Hook sailing off into the sky on the ‘Jolly Roger’.
“James, we’ll always be friends right?” asks Peter.
“Sure” replies Hook “what could possibly go wrong?”
Leaving us wide open for a second instalment…

‘Pan’ has been received skeptically and harshly by film critics who have enjoyed waving around their popular criticisms of Hedlund’s depiction of James Hook as an Indiana Jones/Hans Solo mashup and their loud complaints that the whole film is unrestrained and obnoxious. True enough, but this was never meant to be a subtle movie for over-thinking film critics. It’s a great, boisterous pirate film for adventure-spirited kids and to my mind it meets the criteria perfectly.

All in all it’s a throw-away film that need not be over-thought. Don’t take children who are prone to nightmares or get scared easily. I would generally recommend it for over 7s, although my 6 year old and 4 year-old really enjoyed it – albeit snuggled right into me at times.

See the official trailer below:

This review was written by Play & Go Content Editor, Ali Moylan. Ali is a Play & Go mum who is regularly out and about with her kids and is also a professional photographer. You can see her work by visiting her Facebook page here.

What: PAN the movie.

When: In cinemas from October 2015