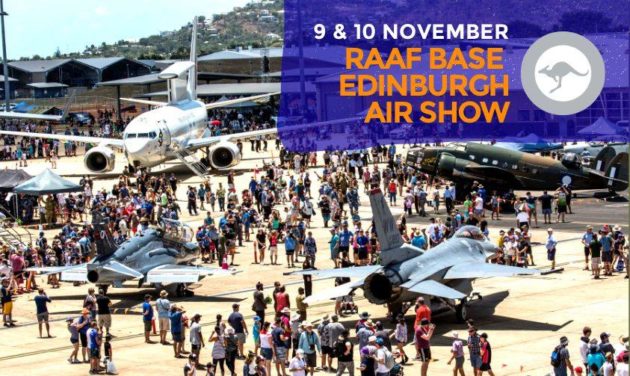 The Australian Defence Force have announced that RAAF Base Edinburgh in South Australia will host the next Defence Force Air Show on 9 and 10 November 2019.

The theme of the Edinburgh Air Show is ‘Vimy to Fifth Generation in 100 Years’.  The Air Show will commemorate the Centenary of the epic flight in November 1919 of notable South Australian Sir Ross Smith and his brother, Sir Keith Smith, who flew from England to Australia in 1919 in a Vickers Vimy to win the Great Air Race.

The Australian Defence Force stages Air Shows approximately every two to three years at various RAAF bases across Australia. The last Defence Air Show at RAAF Edinburgh was in 2007.

RAAF Base Edinburgh is the centre of the nation’s military intelligence, surveillance, reconnaissance and electronic warfare capabilities. It is also home to the Australian Army’s 1st Armoured Regiment and the 7th Battalion Royal Australian Regiment.

Historic and vintage aircraft – 10am to 12 noon

Flying displays will commence each day with historic and vintage military aircraft dating back 100 years in recognition of the epic first flight from England to Australia by Sir Ross and Keith Smith in a Vickers Vimy WW1 bomber aircraft in 1919.

Flying displays featuring the newest Air Force, Navy and Army aircraft will be conducted on each day.  Air Force’s latest aircraft, the F-35A Lightning II, will be on public display for the first time in Adelaide.

The F-35A is the Air Force’s first fifth generation air combat capability. This supersonic, stealth fighter has advanced sensors and data fusion allowing it to gather more information and share it with Navy ships, Army units and other Air Force aircraft, such as the P-8A Poseidon maritime aircraft which calls Edinburgh home.

As well as the F-35A Lightning II and P-8A Poseidon, the full range of ADF fast jet, transport and rotary wing aircraft will also be on show over the weekend. But not only will the public get to see these latest aircraft close up on a working air base, they will also be able to meet and talk with the people who operate them.

In addition to flying displays, the latest ADF and historic aircraft will also be on the ground as static displays for the public to view.

The Air Show will commemorate the Centenary of the epic flight in November 1919 of notable South Australians Sir Ross Smith and his brother, Sir Keith Smith, who flew from England to Australia in 1919 in a Vickers Vimy to win the Great Air Race.

The RAAF Museum and The Sir Ross Smith Foundation will have on display significant memorabilia associated with this epic flight.

A wide variety of food will be on sale from the food courts surrounding shaded dining areas.

More than 60 exhibitors will have stands in the commercial trade hall.

Other activities at the show site include:

“Defence has had a presence in South Australia since World War II and RAAF Base Edinburgh is a significant military base for the Australian Defence Force.  We are looking forward to putting on an Air Show that features historic aircraft as well as demonstrating some of the latest Defence military aircraft and technology.

The RAAF Museum and The Sir Ross Smith Foundation will have on display significant memorabilia associated with this epic flight. Historic aircraft will also be involved in flying displays and static displays on the ground,” Air Commodore Sawade said.

“Other highlights of the Air Show will include amazing performances by the Air Force Roulettes, the RAAF’s aerobatic team, with their new Pilatus PC-21 aircraft.

“There’ll be plenty of entertainment on the ground with performances from the Air Force band as well as extensive displays of the latest military hardware and a wide range of defence and local industry displays, and children’s activities.”

Tickets are on sale via Ticketmaster from July 2019.

For more information and all enquiries please visit the official Air Force website.

What:  RAAF Base Edinburgh Air Show