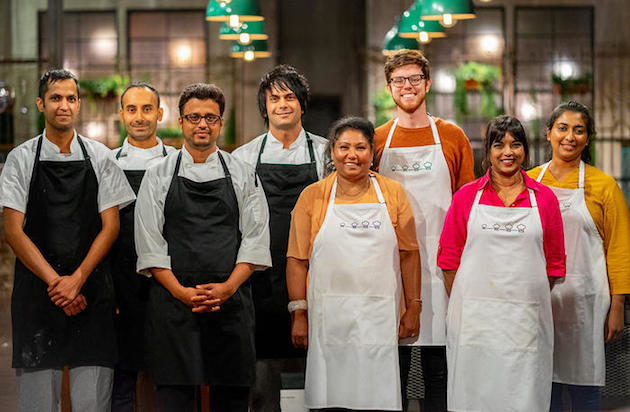 SA’s own Sarjit McLinton (‘Sarj’) will feature on Monday’s edition of The Chef’s Line on SBS Monday 20 August at 6pm, where she will pitch her home-grown culinary skills against other home-cooks and Chefs from the Melbourne restaurant, Atta.

Sarj was chosen by SBS earlier this year to appear on Indian Week. The reality show carries over a full week with the set dishes increasing in difficulty every night. One cook is eliminated each night, so stay tuned to see how far Sarj makes it through the week.

“The one hour cooking challenge, competing with the other Home-Cooks and Chefs against a short timeframe was really challenging,” says Sarj. “But I like a challenge”

“The show’s format makes it possible for cooks and chefs to prove their skills, but the blind taste test will determine the winner fairly by the qualities of the chosen cuisine of the week.”

The 60 year old Malaysian-Indian grew up in Kuala Lumpur with her Punjabi Father and third generation Malaysian Indian mum. She was one of 9 children. At home the family spoke Hindi, Punjabi and Malay and Sarj was encouraged to cook by her Grandmother, aunt and mum.  “All children had this,” says Sarj. “Preparing food was seen as an important skill in growing up.  Times were hard but my mother never failed to put food on everyone’s plates.”

These days Sarj runs a pop-up stall at Plant 4 Bowden on Wednesdays and Fridays where she prepares plant-based foods ‘made-to-order’.  She has chosen the re polished and refurbished site at the old Clipsal Building as the location for a dining event to coincide with the start of Indian Week on The Chefs’ Line.

With the opportunity to watch the episode with Sarj, guests will be then be treated to her home-cooking, inspired by the food prepared on the show. Sarj will let us in on some of her experiences on set at The Chefs’ Line. What she won’t tell us, however, is how far she progressed along The Chefs’ Line, which is kept a close secret.  For that you will have to watch Series 2 from Mondays onwards. You can find late repeats on the SBS Food Network at 9.30pm or online at SBS On Demand. Once the series has aired in Australia it is set for broadcast in 20 other countries. Sarj is excited that her family and friends around the world can watch it too.

Tickets for dinner with Sarj at Plant 4 Bowden are available from Eventbrite.

Can’t make it to the dinner? You can still catch up with Sarj on Wednesday the 22nd of August from 4.30pm to 9.00pm. Meet her at her pop-up stall at Plant 4 Bowden where she will be selling the same dishes she created on The Chefs’ Line but in her ‘vegan style’. Feel welcome to drop in for a chat; taste her food and take a photo with Sarj.

For more information and all enquiries please visit the Facebook event page.

What: Watch & Taste Sarj’s Cooking on The Chefs’ Line