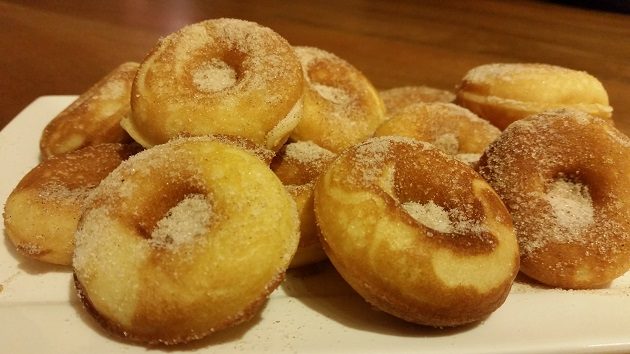 As a child, Cinnamon Donuts were always a special treat. We would watch them being made at the local shopping centre, mesmerised as the dough plopped into the boiling oil, waiting in anticipation as the donuts got carried along the conveyor belt where they would fall into a bowl of cinnamon sugar.

This simple recipe creates sweet, fluffy donuts that can be sprinkled with cinnamon sugar or decorated with icing and sprinkles. They will bring as much delight to the kiddies as those memories bring me now!

All you need is a cheap donut maker, simple ingredients and a few minutes of time. If you can’t get hold of a donut maker, there is an alternative recipe.

3) Using an electric mixer, beat ingredients until the mixture is thick, smooth and creamy

5) Spoon mixture into the donut maker, close the lid and cook for 2 minutes or until the donuts are golden brown.

Donut makers can be bought for around $30 from Kmart and Target.

Alternatives to a donut maker

If you don’t have access to a donut maker, you can try this alternate recipe. To make the hole in the donut, use a donut cutter – available from between $5 and $12 at good online kitchen/cookie cutter supply shops.

If you don’t have a donut cutter, use a 2-1/2-inch round cookie cutter to cut the main circles and a smaller round cutter for the hole in the center.

1.)  In a large mixing bowl, combine eggs and sugar. Beat with an electric mixer on medium speed for 3 minutes or until thick.

2.) In a small bowl combine milk and melted butter.

4.) Add the flour mixture and milk mixture alternately to the egg mixture, beating on low speed after each addition just until combined. Cover and chill the dough for 2 to 4 hours.

5.) Roll the dough on a well-floured surface but do not additional flour into the dough.

6.) Use a floured donut cutter or cookie cutters to cut the dough into rings. Dip the cutter into flour between cuts to prevent the dough from sticking to the cutter. Each cut should produce one doughnut and one doughnut hole.

7.) Add enough vegetable oil in a wok or heavy-based saucepan to cover a donut. Heat vegetable oil to 180 degrees celsius. If you do not have a thermometer, place a wooden spoon or chopstick into the oil. If the oil sizzles around the spoon, it is the correct temperature.

8.) Using a long-handled slotted metal spoon, ease the donuts into the oil, fry the doughnuts, two or three at a time in the oil for 2 to 3 minutes or until they are golden brown, turning once.

9.) Remove the doughnuts with the slotted spoon and place on a plate lined with paper towels. Allow excess oil to drain. Allow to cool slightly then dust with cinnamon sugar!