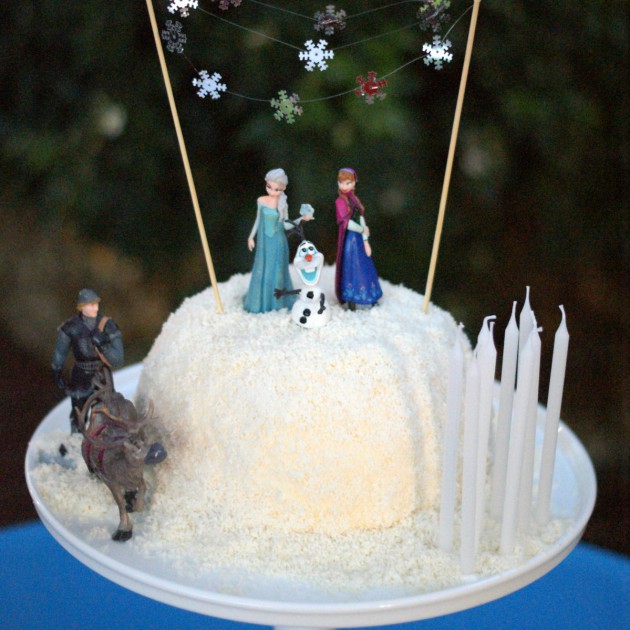 Disney’s ‘Frozen’ movie was the theme for the cake for my daughter’s 9th Birthday. As she is not much of a cake eater but is a massive ice cream fan, the ‘cake’ had to be all ice cream of course. This went very well with the ‘Frozen’ theme.

Originally I was going to make Olaf with icing as I figured he’s a snowman, how hard can it be to make? Well, when you take a close look at Olaf you realise that he’s more than just a snowman who loves warm hugs, his head is not just a ball, it’s an unusual shape and he has quite a few little features. Therefore, when a friend of a friend had some gorgeous little Frozen character cake toppers I could borrow, I was delighted and very thankful that I didn’t have to stay up until midnight trying to make Olaf myself. 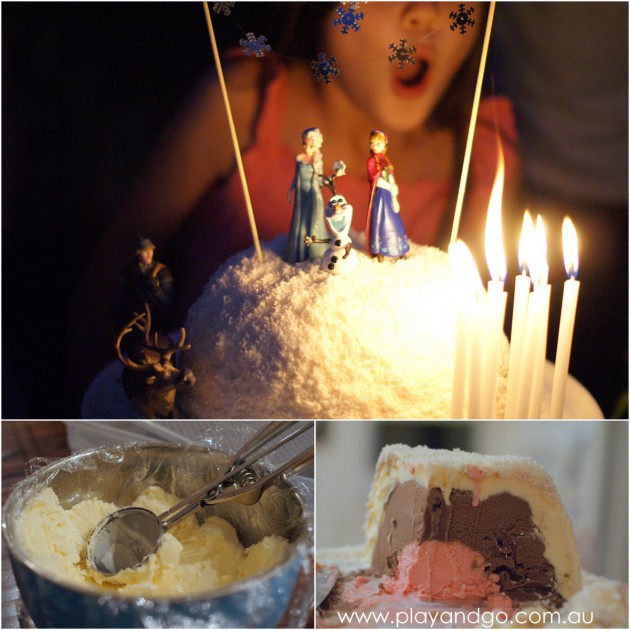 To make the ice cream ‘cake’ I sprayed a stainless steel bowl with oil, then lined it with glad wrap*. I then covered the bottom and all sides of the bowl with vanilla ice cream. It was put back into the freezer to freeze. I then added a layer of chocolate ice cream and again froze it. Lastly strawberry ice cream was added to the centre so when the cake was cut it looked like the pic above right. And yes, you can literally cut the ice cream cake with a knife like you would a normal cake.

After adding the strawberry ice cream and letting it freeze again, the time came to get it out of the bowl. This is always the nerve wracking bit – will it release from the bowl easily? I wiped the outside of the bowl with a warm cloth and then used both a knife and a cake spatula along the edges of the bowl to help release the ice cream from the bowl. Putting the cake round or plate on the top of the bowl you then tip the whole thing upside down. With a little bit of wriggling, lift the bowl – it should come away from the ice-cream dome.

To hide the uneven surface of the ice cream and to give the effect of snow, sprinkle dessicated coconut all over. Using a silicone spatula, paste the cake with a bit of water so the ice cream will be sticky to hold the coconut. Sprinkle more coconut to hide the stands at the bottom of the characters’ feet.

The little Frozen character cake toppers can be bought from Ebay – there are many different suppliers.

The mini silver snowflakes were decorations I had bought at Christmas. These were threaded through with invisible bead making thread and tied onto skewers.

*Instead of glad wrap a friend suggested that maybe using freezer bags to line the bowl would be a stronger alternative, and allow you to lift the cake from the bowl easier. 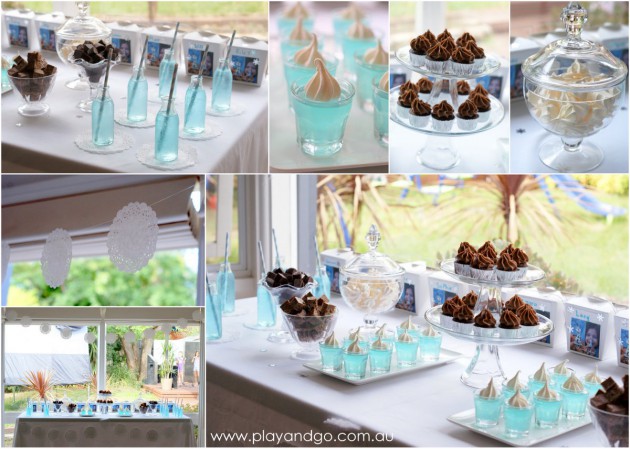 Above are pictures of the tried and true sweets on the party table my birthday girl loves me to make – Mars Bar Slice, chocolate cupcakes, fudge, lemonade jelly, blue lemonade in little bottles and meringues.

The party was a Disco Sleepover Party with “All the fun of a sleepover in pyjamas…but without the sleeping over” (ie the kids went home to sleep). We hired a fabulous jukebox karaoke system from SuperJuke Jukebox and Karaoke Hire complete with disco lights, 3 microphones with stands and a karaoke screen. The kids loved it. However, even though there are 3,500 karaoke songs, plus literally thousands of other songs to choose from, we were entertained with ‘Let it Go’ from Frozen and ‘Roar’ from Katy Perry, over and over again… If our neighbours didn’t know the words to these songs, they would have been very familiar with them by the end of the night. 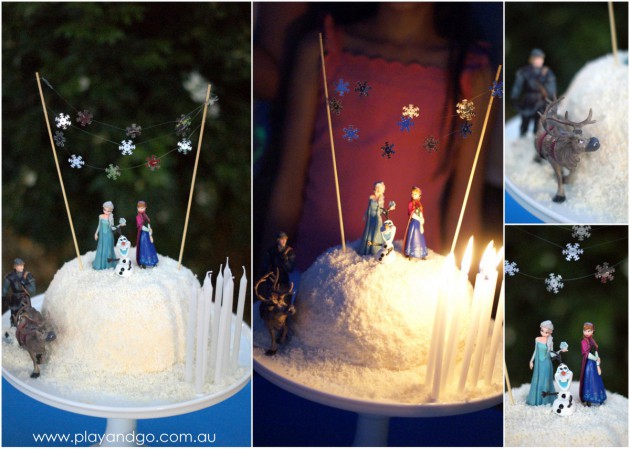 Hiring the jukebox system was very easy – all done online and they happened to deliver and set up the day before so we could do some extra practising. The system kept the kids entertained and with an easy to use touch screen, the kids could operate it themselves. Apart from holding the stick for the limbo they were pretty much left to their own devices. It was a very easy party to host.

See some of our other Party Ideas here or Sweet Treat recipes here. 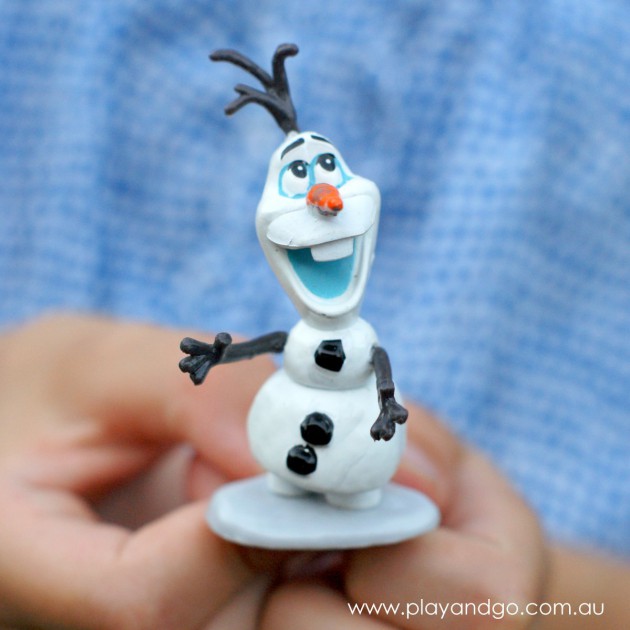 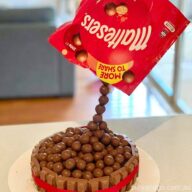 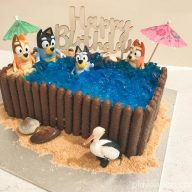 How to Make Your Own Bluey ‘The Beach’ Birthday Cake by ...
Read More 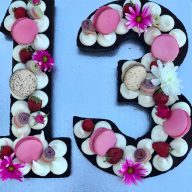 For Miss 13’s Birthday cake, I needed something simple and fast ...
Read More 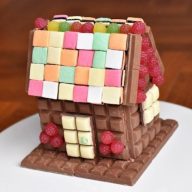 This Chocolate House is a great alternative to a traditional cake ...
Read More 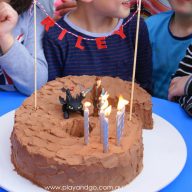 How to Train a Dragon 2 | Jumping Castle Birthday Party

How to Train a Dragon 2 Birthday Cake My little love ...
Read More 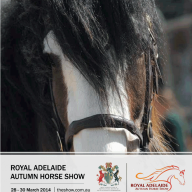